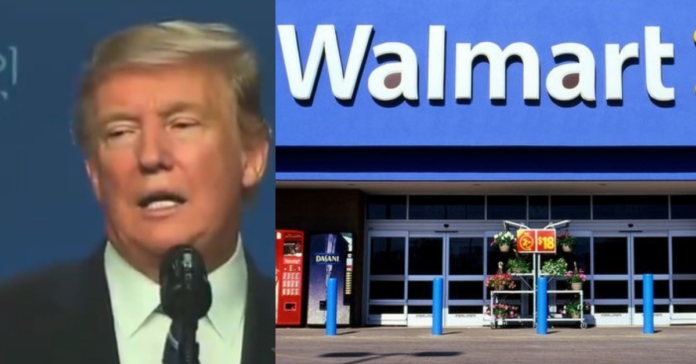 Walmart is one of the most profitable companies in history and a true American success story. But their success came at a cost.

Many local stores were lost because Walmart came to town and many jobs were shipped offshore as Walmart used its size to drive down prices.

Walmart in many cases helped push the outsourcing business because if your prices were too high they would not let you on their shelves.

Look, this is a complicated issue but many many corporations have made a killing off outsourcing to China, oftentimes against the national security interests of America.

So now that we must, and both parties agree on this they just have different tactics, confront China does Walmart stand with Trump?

Nope, they just announced they will raise prices because of Trump’s tariffs. God forbid they do the patriotic thing and make slightly less profit for a few months and let Trump make a deal?

Profits before patriotism for all these global companies and that is why Trump is correct to redo the whole global supply chain away from China. If we don’t do it now, it will never be done.

Look, this is a war for the soul of the future - do we want the global system to be based on freedom and democracy or authoritarianism and communism.

If these companies that have propped up China so profitably for so long cannot take a little hit to help Trump win this war then they are a sham. It would not surprise me to find that they raise prices on goods they already bought and paid for as well just because they can.

From CNN: Walmart, America’s largest retailer, said Thursday it will raise prices on some products as a result of the Trump administration’s tariffs on Chinese goods.

“We’re going to continue to do everything we can to keep prices low. That’s who we are. However, increased tariffs will lead to increased prices, we believe, for our customers.” Walmart chief financial officer Brett Biggs told reporters on a call after the retailer reported earnings for the first quarter of 2019.

Biggs did not say which items will become more expensive at Walmart. He noted, however, that Walmart’s merchant teams have been developing strategies to mitigate cost increases and working with its suppliers to manage prices.

Walmart has less exposure to China than many other retailers because more than half of its sales come from groceries. Most of the food Walmart sells comes from the United States and other regions such as South America.

But Walmart (WMT) still imports 26% of its merchandise from China, UBS analyst Michael Lasser estimated in a report earlier this week. Target (TGT) imports 34% of its products from China. Other companies, including sporting goods, auto parts and furniture sellers, have even greater exposure to China.

Last week, the Trump administration hiked tariffs on $200 billion of Chinese-made goods. The tariffs mostly hit industrial materials and component parts, but also applied to luggage, hats and gloves for US importers.

Additionally, the United States has started a formal process to put new tariffs in place on the remaining exports coming from China that aren’t already taxed. That could make a number of goods, including toys, clothes and sneakers, more expensive for American consumers.

Retailers depend heavily on China in their supply chain. China accounted for about 41% of all apparel, 72% of all footwear, and 84% of all travel goods imported into the United States in 2017, according to a letter several retail trade groups sent to the Trump administration last week.

Other retailers have also recently warned that tariffs will hit their businesses.

On Wednesday, Macy’s said it will raise prices on some merchandise because of the trade war with China.