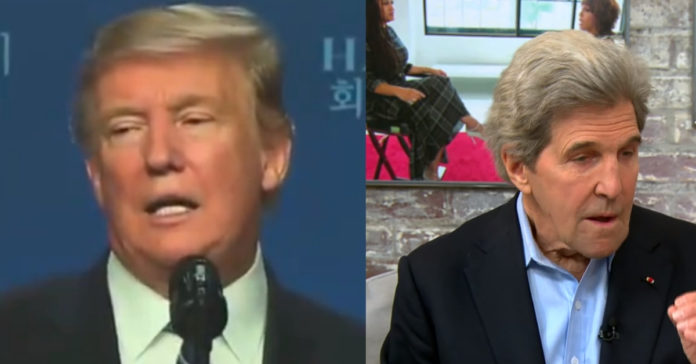 President Trump is done playing games. Newly embolden after the cloud that was the Mueller investigation, otherwise known as a Democratic political hit job, was lifted Trump is wasting no time in moving on his ambitious agenda.

The left thought they could depose Trump, or in the worst case scenario damage him politically so that Trump would be weak and ineffective.

They were wrong on all accounts - Trump is a fighter and after getting good news from Bill Barr, he is enacting his agenda with speed and ruthlessness.

Look, fixing the mess left behind by Obama and Bush is no small feat and Trump faced massive opposition with Mueller hanging over his head.

That is all gone and John Kerry for one better be careful. From Lidblog:

During interviews to promote his new book this past September Kerry told an interviewer that he has met with Iranian Foreign Minister Javad Zarif three or four times since leaving office and that their talks touched on the international nuclear agreement which Kerry negotiated and President Trump withdrew from because it was such a bad deal or America. This was the first time Kerry admitted this violation, but in May of this year, the Boston Globe reported that he had been secretly meeting with the Iranian foreign minister and European leaders, advising them on how to save the flawed JCPOA. The President is saying that Kerry’s meetings were a violation of the Logan Act. And the stepfather of the Heinz Ketchup fortune has violated the Logan Act before.

In 1985, Senator John Kerry traveled to Nicaragua for a friendly get-together with the Sandinista president, Daniel Ortega. The position of the Reagan administration was to support the opposition Contras. Kerry wasn’t much interested in the administration’s position. Upon his return to the United States, Kerry met with President Reagan to convey a message from Ortega. Reagan “wasn’t thrilled,” Kerry later told the New York Times.

In 2006 Kerry went to Syria to meet with Assad over the objections of President Bush #43, who was trying to isolate the Syrian despot at the time.

In January 2018 Israeli Newspaper Ma’ariv reported that John Kerry had given a message to Palestinian Authority Pres. Abbas, “that he should stay strong in his spirit and play for time, that he should not break and will not yield to President Trump’s demands,” because Trump will be out of office within the year.”

There are those who say Senator Tom Cotton’s March 2015 open letter to the Iranian regime was an example of breaking the Logan Act. But the message wasn’t a negotiation, it didn’t even discuss possible terms of a deal. The Cotton letter signed by 47 Senators simply explained how the constitution worked and that any agreement that wasn’t ratified by the Senate could be overturned (which is precisely what happened).

Ironically Kerry objected to the Tom Cotton letter, “During my 29 years here in the Senate, I have never heard of—nor even heard of it being proposed—anything comparable to this,” Kerry said. “If I had, I can guarantee that no matter who was president of what the issue was and no matter who the president was, I would have certainly rejected it.”

Saudi Arabia and others in OPEC will more than make up the Oil Flow difference in our now Full Sanctions on Iranian Oil. Iran is being given VERY BAD advice by @JohnKerry and people who helped him lead the U.S. into the very bad Iran Nuclear Deal. Big violation of Logan Act?