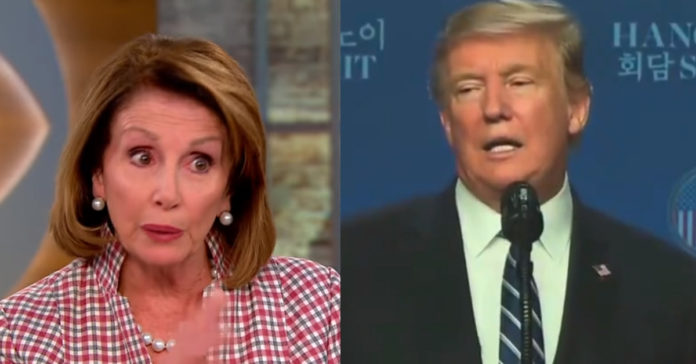 Nancy Pelosi is gearing up for some bruising battles with President Trump. The next two years will be a chess game as Trump solidifies his base and increases his gains in typical Democratic strongholds, while Pelosi tries to stop him.

It will be a political battle and Pelosi aims to win rather than do what the American people want - which is to work with Trump and find solutions to our common problems.

Look, Trump just checkmated Pelosi and the Democrats and Mexico. And they know it. He is demanding that Pelosi work with him to solve the border crisis, and he is demanding that Mexico simply stop the migrants from traveling through their country.

If they don’t work with him, he will close the border. Pelosi can stomp her feet and throw a temper tantrum, but that will not change the reality - Trump holds the cards.

This is not going away - Trump would be derelict in his duty if he just ignored this crisis. But as he has solutions, his partners need to step up or pay the price.

From Politico: House Speaker Nancy Pelosi on Tuesday questioned who is “poisoning” President Donald Trump’s mind when it comes to immigration policy, calling his recent threat to shut down the U.S.-Mexico border and his move to cut off aid to Northern Triangle countries in Central America “one of his worst ideas.”

“Stiff competition, mind you, this is one of his worst ideas,” Pelosi (D-Calif.) said of Trump’s decision to end the assistance funding to Guatemala, Honduras, and El Salvador.

“It could cover so much territory that it’s hard to say worst. This is not a good idea.”

Pelosi, speaking at a POLITICO Playbook interview, argued that cutting off the funding, which is aimed at creating stability in the so-called Northern Triangle nations, was counter-productive to stemming the surge of asylum-seeking migrants from those countries showing up at the U.S.-Mexico border.

She also pushed back on the White House’s insistence that shutting down the border would force Mexico to compromise on border operations, wondering aloud where the president was getting his ideas from and saying she didn’t think “advising” was the appropriate term to use.

The president doesn’t really understand that. So I don’t know what the basis of what he believes. He may have decided — I can’t imagine he believes that would be a good idea.

“I don’t know who is advising him there and if advising is even a word. I don’t know who’s poisoning his mind on some of these subjects,” she said. Pelosi predicted that congressional appropriators could buck the president on the issue, even in the GOP-controlled Senate, and she pushed for increasing assistance aid to the Northern Triangle region.