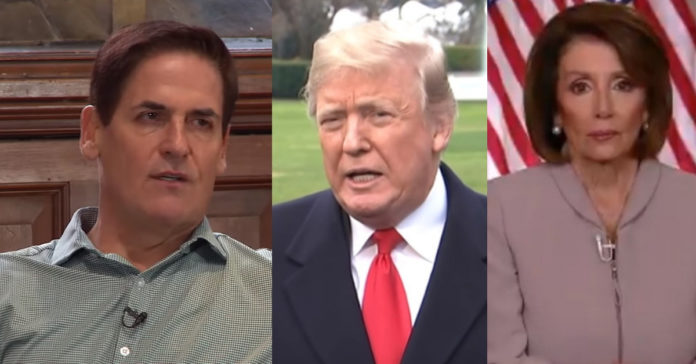 Most people are not fully aware of how our immigration system became the mess that it is. It is a complicated tale of best intentions gone wrong.

Look, we made the laws and we can change them. Which is what Trump is trying to do. We are the most generous nation in history and we accept all and give them a better life and opportunity.

One of Trump’s proposals that enraged the left was to change our system to take more immigrants with in-demand skills that can help America now.

We have done so much for the world, but the world has changed. We helped lift China out of poverty and now that they are our competitors, we need to change our trade deals.

Same with our immigration laws. Why can’t we put America’s interests first, ahead of other poorer countries who depend on us, as Trump wants, by changing the rules to bring in only the most highly skilled immigrants?

It is common sense as is the new China trade deals…so why do the Democrats object?

It seems Mark Cuban is finally coming around to embrace Trump’s idea, hopefully, Pelosi will too.

Cuban appeared at the Dallas Startup Week on Tuesday; there, he discussed the challenges entrepreneurs face when deciding whether to invest in companies based on an individual’s immigration status, dallasnews.com reported.

While he said he believes the current administration is working to improve the situation, Cuban added that “it’s not happening fast enough.”

“Just to be brutally honest, we’re doing it the wrong way,” he said according to dallasnews.com.

The criticism from the “Shark Tank” star and deep-pocketed investor came just a month after he told Fox News in an email that he was not completely ruling out a run for the White House.

“The tea leaves would have to align perfectly,” he wrote.