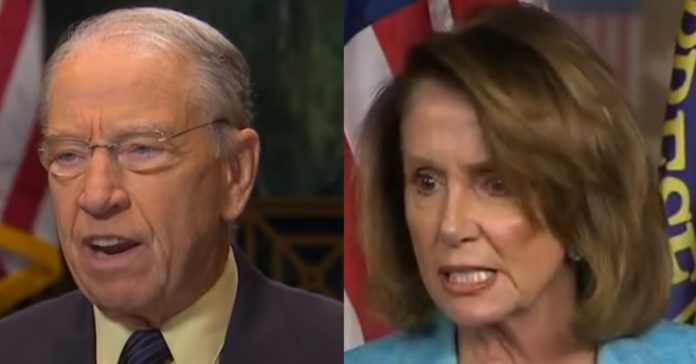 Chuck Grassley just went after Nancy Pelosi over her treatment of President Trump in a blistering speech from the Senate floor.

He knocked Pelosi off her high horse and dragged her back down to earth by calling out exactly what Pelosi is doing with her unprecedented level of presidential harassment.

Look, there is no law that says Trump has to release his taxes, and as the Democrats will immediately leak them, why should he?

Because the Mueller report came up empty? They lost, not once but twice. First with the election and then with Mueller. This is childish and needs to stop.

“When you strip out all their pretexts, and when you strip out their circular logic, all you have are Democrats who want to go after the president any way they can,” the Iowa Republican said in a speech on the Senate floor.

“They dislike him with a passion, and they want his tax returns to destroy him. That’s all that this whole process is about, and it’s Nixonian to the core.”

Grassley argued that Democrats have no legitimate legislative purpose for seeking Trump’s tax information, as they said was the purpose for the request.

House Ways and Means Committee Chairman Richard Neal, D-Mass., formally requested six years’ of Trump’s tax returns Wednesday, saying that the panel “has a responsibility to conduct oversight of our voluntary Federal tax system and determine how Americans — including those elected to our highest office — are complying with those laws.” By law, Neal has the authority to obtain individuals’ tax information.

Prior to Trump, presidents since Richard Nixon generally had voluntarily made their tax returns public. Nixon released his tax information after a controversy over his personal taxes and distrust of his oversight of the IRS.