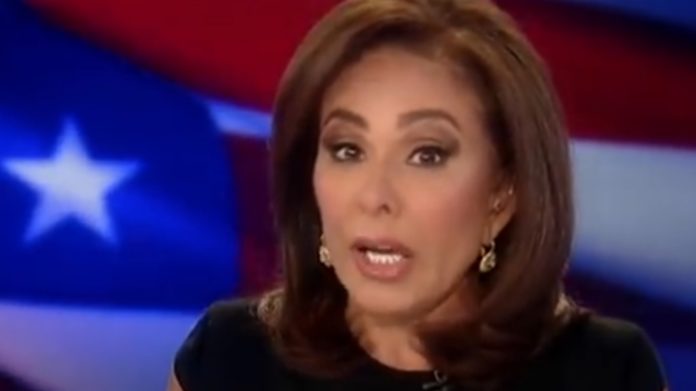 A Black Lives Matter organizer sued Judge Jeanine Pirro for defamation over comments she made in an appearance on Fox News.

The judge today tossed the suit as frivolous garbage, citing the first amendment as grounds. From The Washington Times:

A New York judge sided with Fox News and its host Judge Jeanine Pirro Monday, dismissing a defamation case brought by a Black Lives Matter organizer who claimed the network and television host said he directed a protester to attack a police officer.

The lawsuit stemmed from of a 2017 television appearance where Ms. Pirro described a lawsuit brought by a police officer against DeRay Mckesson, a civil rights leader who appears at Black Lives Matter events, after a protester attacked and injured the officer.

Ms. Pirro said the officer “was injured at the direction of DeRay Mckesson.”

Mr. Mckesson filed his defamation challenge in 2017 after the network and host refused to retract the statements. He argued he couldn’t be held responsible for a rouge protester.

“Viewing the entire video sequence as a whole it is clear that Pirro is expressing her opinion that the plaintiff-officer should be allowed to pursue his civil complaint,” wrote Judge Robert David Kalish.

From TMZ: Black Lives Matter leader DeRay Mckesson is coming up short in his legal battle against Jeanine Pirro — his defamation lawsuit has been tossed out of court.

The judge dismissed the case, according to docs filed Thursday in NY state, saying most of the statements Pirro made about Mckesson during a “FOX & Friends” appearance were her opinion … and therefore protected by the First Amendment.

You’ll recall … DeRay sued Pirro and FOX News over comments she made back in 2017 when she essentially blamed him for inciting violence during a Baton Rouge protest. A police officer was injured during the incident, and Jeanine felt DeRay should’ve been held responsible for that.