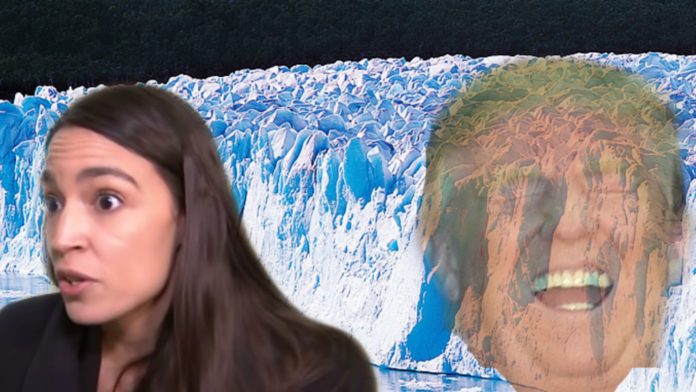 What a day for the good guys. First, Trump was totally exonerated and the jackals on the media are wearing egg on their faces - and will be right up until Trump’s second inauguration.

Next, the news broke that another sacred cow for the left, Michael Avenatti, is a total crook and an absolute fraud who may be spending the rest of his life in jail.

And now a new report from NASA ruins another sacred cow on the left - the shrinking glaciers.

From the Associated Press: A major Greenland glacier that was one of the fastest shrinking ice and snow masses on Earth is growing again, a new NASA study finds.

The Jakobshavn (YA-cob-shawv-en) glacier around 2012 was retreating about 1.8 miles (3 kilometers) and thinning nearly 130 feet (almost 40 meters) annually. But it started growing again at about the same rate in the past two years, according to a study in Monday’s Nature Geoscience . Study authors and outside scientists think this is temporary.

“That was kind of a surprise. We kind of got used to a runaway system,” said Geological Survey of Denmark and Greenland ice and climate scientist Jason Box. “The good news is that it’s a reminder that it’s not necessarily going that fast. But it is going.”

Box, who wasn’t part of the study, said Jakobshavn is “arguably the most important Greenland glacier because it discharges the most ice in the northern hemisphere. For all of Greenland, it is king.”

A natural cyclical cooling of North Atlantic waters likely caused the glacier to reverse course, said study lead author Ala Khazendar, a NASA glaciologist on the Oceans Melting Greenland (OMG) project. Khazendar and colleagues say this coincides with a flip of the North Atlantic Oscillation — a natural and temporary cooling and warming of parts of the ocean that is like a distant cousin to El Nino in the Pacific.

The water in Disko Bay, where Jakobshavn hits the ocean, is about 3.6 degrees cooler (2 degrees Celsius) than a few years ago, study authors said.

While this is “good news” on a temporary basis, this is bad news on the long term because it tells scientists that ocean temperature is a bigger player in glacier retreats and advances than previously thought, said NASA climate scientist Josh Willis, a study co-author. Over the decades the water has been and will be warming from man-made climate change, he said, noting that about 90 percent of the heat trapped by greenhouse gases goes into the oceans.

Greenland ice and climate scientist Jason Box, who was not part of the study, told the Associated Press that the finding “was kind of a surprise.”

“We kind of got used to a runaway system,” Box said.

Box told the AP that the glacier is “arguably the most important Greenland glacier because it discharges the most ice in the northern hemisphere.”

The study linked the new growth of the glacier to the cooling of ocean waters in Disko Bay, on the western coast of Greenland.

According to the AP, authors of the study and other scientists believe the growth of the glacier is only temporary.

One author of the study, NASA climate scientist Josh Willis, said that the glacier’s growth is “good news” in the short-term but bad news in the long-term because it reveals that ocean temperature plays more of a factor in glacier retreats and advances than scientists previously thought.

“In the long run we’ll probably have to raise our predictions of sea level rise again,” Willis told the AP.