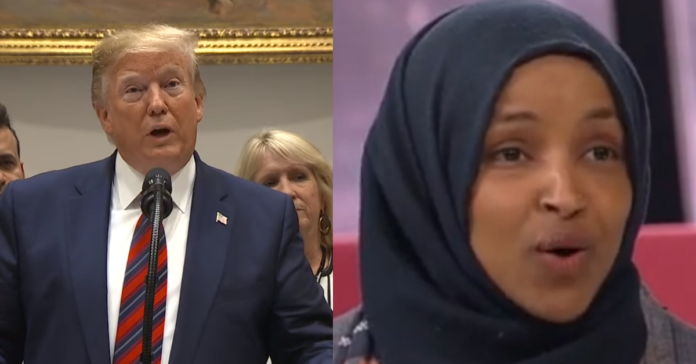 President Trump will unveil his long-awaited immigration overhaul tomorrow and based on a sneak peek, Ilhan Omar will be horrified.

Trump will propose a skill-based immigration policy that will be the envy of the world, rather than what we have now which is the joke of the world.

For such a generous people we sure are suckers - but we elected Trump to change that and boy is he succeeding.  From Fox News:

The White House is set to unveil a sweeping new plan that would radically transform the makeup of immigrants in the United States, ending the visa lottery program and implementing a comprehensive merit-based admissions procedure, three senior administration officials told Fox News on Wednesday.

Those percentages, under the new plan, would shift to 57 percent and 33 percent, respectively. Ten percent of immigrants would be admitted on humanitarian or other grounds, but the plan would end the visa lottery program.

In its place: a new “Build America Visa” program that would recognize “extraordinary talent” and “people with professional and specialized vocations,” including exceptional students, Fox News has learned.

Potential immigrants would be assessed using a point-based system, accounting for factors including age, English proficiency, whether each candidate has an offer of employment above a certain wage threshold, and educational and vocational certifications. Pledges to invest and create jobs also would be considered.

The Trump administration also said it has considered other similar immigration systems. When Canada implemented a merit-based system, it largely resulted in a “pooling” of immigrants from East Asia and the Indian subcontinent. To avoid pooling, the White House said it would add points to immigrant candidates from under-represented countries, but it would not impose caps on certain countries.