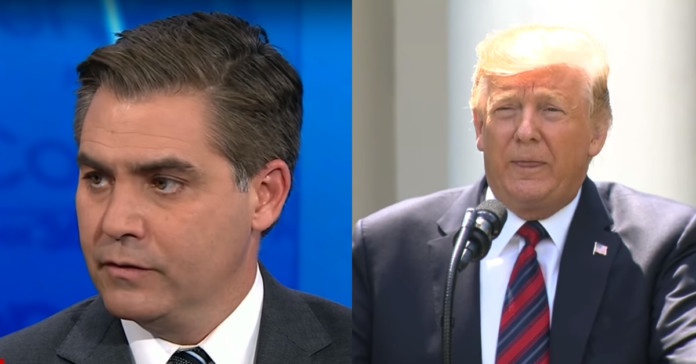 Jim Acosta just got busted trying to smear President Trump. Sadly, we have come to expect this from the media, but we must point out the way they frame the narrative so people don’t fall for it.

Look, the media has a narrative and leakers and others with agenda’s play to this - hell Trump did for 40 years and basically owned the media.

How much free media did Trump get because he knew the media craved access and he had the courage to appear unscripted on live television? A lot.

“We are proposing an immigration plan that puts the jobs, wages, and safety of American workers first. Our proposal is pro-American, pro-immigrant and pro-worker,” Trump said today introducing his immigration plan that Acosta promptly mischaracterized. Thanfully some smart reporters at Breitbart busted him.

From Breitbart: CNN’s chief White House correspondent Jim Acosta on Thursday misquoted a portion of President Donald Trump’s immigration speech and was quickly met with a fact-check by a Breitbart News reporter.

During his remarks, the president assailed some asylum seekers’ abuses of the country’s immigration system. “Our nation has a proud history of affording protection to those fleeing government persecutions. Unfortunately, legitimate asylum seekers are being displaced by those lodging frivolous claims,” he said.

Acosta promptly accused the president of portraying all asylum claims as unmerited, misquoting him on social media: “Trump in Rose Garden speech paints asylum seekers with broad brush accusing them of misleading immigration authorities at border: ‘These are frivolous claims.’”

Acosta did not acknowledge that he had misquoted the president after Spiering’s correction.