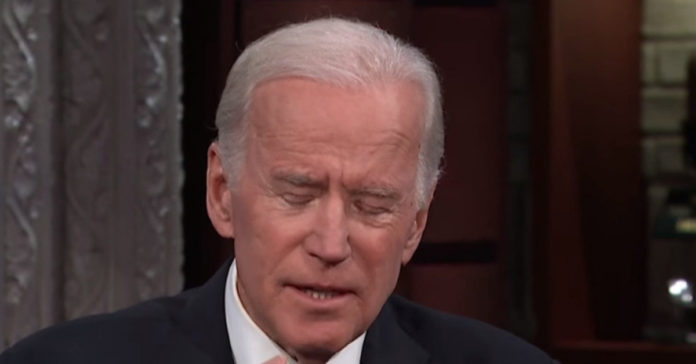 Joe Biden is prone to gaffes and other verbal maladies that make him a risky bet to take on Trump in 2020.

All it will take is, not for Trump - the usual laws of political gravity do not apply to Trump, one big blunder from Joe down the stretch of the campaign to sink him.

But he may never even get a chance to blow it at the end like Hillary, no, he will probably be run out of the new unsufferable Democratic party.

The party has changed and gone left and Biden has many skeletons…. under these new conditions they will sink him. Skeletons like this one.

From The Free Beacon: Former vice president Joe Biden once told a group of constituents in Delaware he viewed homosexuals working for the federal government as “security risks,” according to an archived local news report dug up by the Washington Free Beacon.

Biden has positioned himself as an advocate for gay rights since leaving the White House. Last year, his foundation launched the “As You Are” program to promote acceptance of members of the LGBTQ community and fight against their discrimination.

In his first year as a U.S. senator, however, Biden appeared unwilling to accept members of the gay community as federal employees.

The article from the Morning News, a Wilmington, Delaware-based paper no longer in circulation, covered a September 24, 1973, meeting Biden held with members of the North Star Civic Association. One of the members, a gay-rights activist, asked Biden questions on job discrimination at the U.S. Civil Service and in the military.

Biden’s “gut reaction” on the issue was that homosexuals were “security threats,” he said.

“My gut reaction is that they (homosexuals) are security risks,” Biden is quoted as saying, “but I must admit I haven’t given this much thought … I’ll be darned.”

Biden agreed to mail the activist, Robert Vane, more thorough answers to his questions, according to the article.

The Free Beacon reached out to the North Star Civic Association to see if it has any record of the Biden meeting and responses the senator might have sent, but did not receive information by press time. Attempts to locate Vane were unsuccessful.

Rick Valelly, a Swarthmore University professor currently writing a book on the history of government employment discrimination against gays and lesbians, says Biden’s view of homosexuals as “security threats” came from a period decades earlier now known as the Lavender Scare, where thousands of gay government workers were fired because of their sexual orientation being deemed a security risk.

“It was a view that dated back to the late 1940s,” Valelly explained. “The idea was that high status gay men would be so afraid of being outed that they’d be susceptible to blackmail.”

“It was a view that activists fighting for civil rights were trying to vaporize, because there was never an instance of homosexual blackmail,” he said.

In July 1950, Democratic senator Clyde Hoey of North Carolina led a confidential Subcommittee on Investigations hearing on “the homosexuals and what effect they have upon the Government as a security risk,” archived hearing records show. Three years later, President Dwight Eisenhower issued an executive order that included “sexual perversion” as a security risk and reason for termination from federal employment.