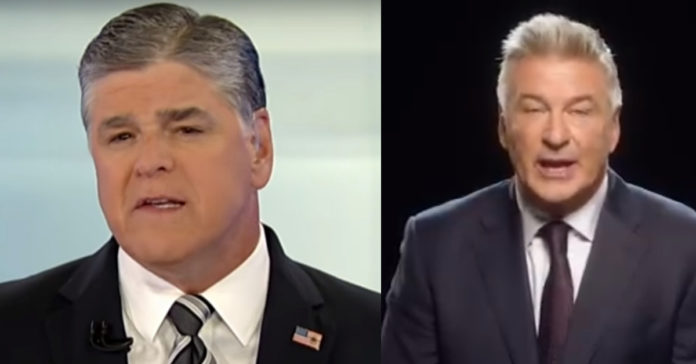 “Hannity is an idiot and he is an untalented idiot. Hannity has no talent whatsoever. He has none,” Baldwin wheezed.

“He is like a Long Island, working-class buffoon where everything is just hate. Sean Hannity, who lacks self-awareness on any level, he has got zero self-awareness.”

“Okay Alec, if I am so dumb what did I do on radio and TV is so easy, why have you failed on cable TV news show, a network show, and you and I both know you wanted to work on talk radio? You have failed and flopped in both these businesses over and over again.”

But Sean was just getting started. From Newsweek:

The Fox anchor then proceeded to play a recording of the pair sparring on The Brian Whitman Show on WABC radio in 2006. Baldwin can at least claim to be consistent in his criticism of Hannity. “Why would I want to come on the show with a no-talent former construction worker hack like you?” Baldwin asked.

Hannity said in the 2006 clip that Baldwin was a “third-rate Hollywood actor,” before the latter stormed out of the radio show.

The host of The Sean Hannity Show then went on to play a recording of Baldwin hosting a show on WPHT radio later in the same year and the now-infamous recording of the actor calling his daughter a “rotten little pig” in a 2007 voicemail message.

There is certainly no love lost between Baldwin, a forthright Democrat, and Fox News. Baldwin’s satirization of President Donald Trump on Saturday Night Live has been a lightning rod for conservative criticism, not least from the president himself.

In an interview with IndieWire, Baldwin explained his impression of Trump was deliberately unsophisticated.

“I made him as two-dimensional as I believe he deserves to be made,”  Baldwin told the site. “And we’ve certainly vulgarized it from time to time, beyond certain limitations. But it’s essentially us repeating back what he says, and just holding up a mirror to what he says and does.”