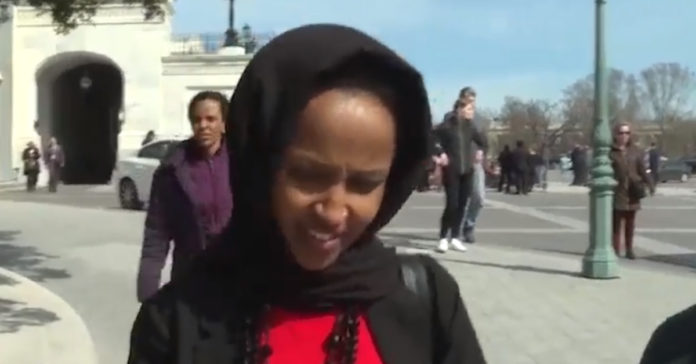 A leading conservative voice and prominent media figure just went there about Ilhan Omar. He is calling for her impeachment and the left is furious.

Jack Posobiec, a reporter for OANN, took to Twitter to make his case. “Raise your hand if you agree its time to impeach Congresswoman Ilhan Omar,” he tweeted.

“House members have been expelled for disloyalty to the United States before There is precedent for Ilhan Omar…Expel Ilhan Omar from the House of Representatives,” Jack added.

Former Naval Intelligence officer Posobiec also tweeted out this: “Ilhan Omar currently has access to top secret classified information If she had applied to the intelligence community or military, she would’ve never passed the SSBI security vetting process the rest of us did.”

He also reminded everyone that Omar once, “defended 9 Somali migrants trying to join ISIS.”

President Trump for his part silenced Omar with a simple history lesson many Americans, shockingly, have seemed to forget. The truth behind 9/11 and who attacked us.

From NBC: The video that Trump posted on Friday spliced a statement Omar made about the Sept. 11, 2001, attacks with footage of the Twin Towers in New York collapsing. It is captioned “WE WILL NEVER FORGET.”

Omar’s reference to the terrorist attacks came in a speech last month at an event hosted by the Council on American-Islamic Relations (CAIR) in Los Angeles. During the event, Omar spoke about how Muslim Americans’ were mistreated and their constitutional rights and freedoms were infringed on after the 9/11 attacks.

Within her remarks, Omar made a statement that her critics said glossed over that act of terror. Democrats contend, however, that the president’s video could incite violence.

“CAIR was founded after 9/11 because they recognized that some people did something and that all of us were starting to lose access to our civil liberties,” she said in the speech last month.

It was the congresswoman’s wording that “some people did something” — repeated in the video tweeted by Trump — however, that Omar’s critics have seized upon.

WE WILL NEVER FORGET! pic.twitter.com/VxrGFRFeJM

Pelosi for her part was enraged at Trump but rumors have been flowing that she is not happy with Ilhan Omar for making her defend her politically poor positions.

“The memory of 9/11 is sacred ground, and any discussion of it must be done with reverence. The President shouldn’t use the painful images of 9/11 for a political attack,” Pelosi said in a statement.

“It is wrong for the President, as Commander-in-Chief, to fan the flames to make anyone less safe,” she added.