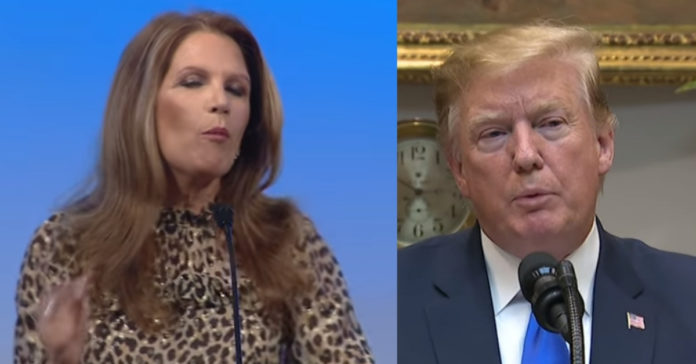 Former congresswoman Michele Bachmann just enraged what is left of the Democratic party with some powerful words about President Trump.

Speaking on the Christian radio program “Understanding the Times” with host Jan Markell, Bachmann went after the deep state for undermining Trump before saying Trump is the most godly and biblical president we have ever seen.

“I will say to your listeners, in my lifetime I have never seen a more biblical president than I have seen in Donald Trump,” she said.

“He has so impressed me in what he has done, and we haven’t even talked about Israel. What he has done to advance Israel,” she added.

“He is highly biblical and we will in all likelihood never see a more godly, biblical president again in our lifetime,” she continued.

“So we not only need to be praying for him, we need to support him, in my opinion, in every way that we can,” she said.

“The deep state are people who have permanent jobs within the federal government,” Bachmann said taking a few shots at Trump’s enemies before saying that Christians must pray that God will expose them so they can be removed from the U.S. government.

“Not everyone is a part of the deep state, but you don’t need everyone. If you have just a hundred people who are in line with the goals to advance cultural and economic Marxism or to advance the goals of Islamic jihad, for instance, and they have jobs within the federal government, they can do very serious damage.”

“This is how I pray,” she said. “I pray according to the scripture which says we need to pray to expose, ask the Lord to expose the hidden deeds of darkness.

And he has remarkable ways of doing this, where you can only say it’s the hand of God who exposes the hidden deeds of darkness.

And that’s one way I would ask your listeners to pray, to please pray that God would expose these hidden deeds of darkness. And he does. Trust him, he will,” she added.