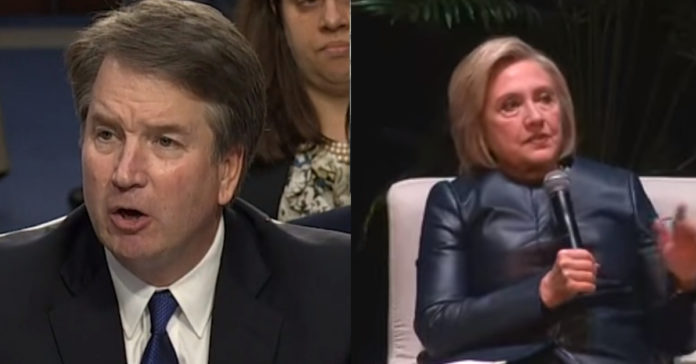 Hillary is still bitter after her epic loss, and make no mistake the Clintons had it out for Judge Brett Kavanaugh for what he did with Ken Starr.

Kavanaugh worked with Starr’s team during the investigations of Bill Clinton, something Kavanaugh brought during his confirmation smear job.

Brian Fallon, former press secretary for Hillary Clinton’s 2016 election campaign, together with his group, Demand Justice, is behind the new attacks.

A student group calling itself “Mason For Survivors” began circulating a petition last month, so far attracting nearly 5,000 signatures, urging to “terminate AND void ALL contracts and affiliation with Brett Kavanaugh at George Mason University” on the grounds that the justice was accused of misconduct.

But the campaign is being given a partisan boost thanks to Brian Fallon, former press secretary for Clinton’s 2016 campaign, who’s now in charge of Demand Justice, a liberal advocacy group that doesn’t disclose its funding.

Fallon and his group are paying for Facebook ads that target anyone linked with George Mason University, urging them to sign the petition, in addition to signing a separate petition that calls upon the Democrats in Congress to investigate Kavanaugh, the HuffPost reported.

“Brett Kavanaugh’s performance during his testimony in front of the Senate was a disgrace. His blatant partisan attacks and hostile behavior towards senators calls into question his ability to serve as a fair and impartial judge.

His conduct undermines the legitimacy of his decisions and the entire Supreme Court,” read the ad on Facebook on Friday. “We’re calling on Congress to open an investigation into Kavanaugh right now.”

Fallon justified the move in a news release, saying the allegations raised during the confirmation hearing last year, in his view, were credible.

“Brett Kavanaugh has been credibly accused of sexual assault by multiple women whose allegations have not been thoroughly investigated,” Fallon said. “His confirmation to the Supreme Court does not absolve him of guilt, and he should not be given a platform to teach. We stand with survivors and urge the George Mason University administration to fire Kavanaugh.”