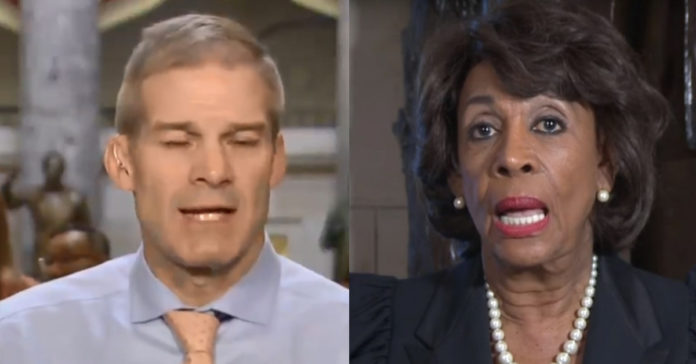 Jordan found other co-conspirators in this secret plot and he is now exposing them all. As he should, look this whole witch hunt is political. Trump is not a politician and while he and his campaign may not have been familiar with all the technicalities of the law, Mueller found he did not break any laws. In other words, it is time to move on.

The ranking member on the Oversight Committee, Jordan indicated that Cummings had coordinated the MOU with House Financial Services Chairwoman Maxine Waters, and House Intelligence Committee Chairman Adam Schiff, while keeping Republican members in the dark on investigations into Trump and his campaign.

“You did not consult with Republican Members of the Committee or allow Members to consider and debate the terms of your MOU before executing the MOU with Chairwoman Waters,” Jordan wrote.

“This subpoena is a grave abuse of the Committee’s authority and a violation of the Chairman’s pledge to the Committee. Although the Rules of the House of Representatives grant Chairman Cummings broad oversight authority, we rely on the Chairman to use it responsibly,” Jordan wrote. “Twelve days ago, on April 3, 2019, Chairman Cummings, in a free-wheeling press availability, announced to the media that he was preparing a subpoena to Mazars for this sensitive, personal information about President Trump’s finances.”

Instead of noticing a business meeting during the week of April 8 for the Committee to consider and debate this subpoena—when there was room in the Committee’s calendar—he waited and waited until just after Members had left for the two-week Easter district work period to announce his intention to subpoena Mazars. This action violates the Chairman’s promise to the Committee at our organization meeting.

“The Democrat obsession with the president and his family is gravely dangerous and counterproductive to the work of our Committee,” Jordan wrote.

“The American people can now see that Democrats’ pursuit of truth is clouded by their obsession with attacking the president and the first family. None of our actions would be necessary if not for Chairman Cumming’s decision to pursue reckless, partisan investigations designed to attack the president and his family.”