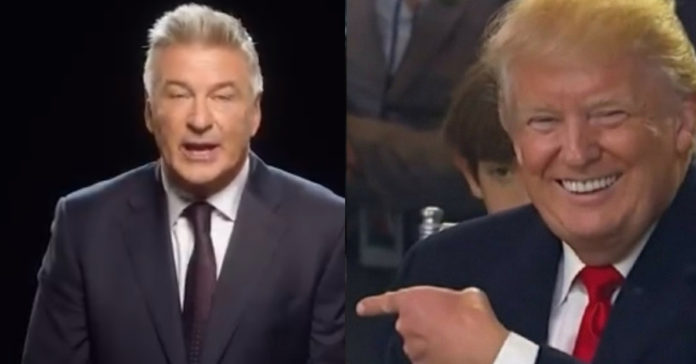 New York has spoken and they do not like liberal goon Alec Baldwin. Famous for his temper and assault charges more than his acting, Baldwin lashed out at a public mocking of him by a New York street artist.

But it gets worse for Alec, even though he denies that he assaulted the man, and after going to counseling, he is now getting sued for the assault. Couldn’t happen to a nice guy.

From Page Six: A street artist poked fun at Alec Baldwin‘s parking spot saga. Baldwin took to Instagram on Friday to show a new piece of street art outside of his New York apartment building. “Reserved Alec Baldwin,” the message, painted onto the street, reads.

“Outside my building. Not funny. It IS funny, but not funny. You catch me?” the “Saturday Night Live” star captioned the photo.

The prank paint job comes two months after the 61-year-old pleaded guilty to harassment over a parking spot spat. He was sentenced to anger-management classes and was ordered to pay a $120 fine.

He later told Howard Stern that the classes taught him he wasn’t actually that angry after he heard other people’s rage-fueled stories. Alec Baldwin is being sued by a man he punched in the face during a highly-publicized row over a Manhattan parking spot last fall, DailyMail.com can reveal.

A lawsuit filed against Baldwin in New York Supreme Court last week on behalf of Wojciech Cieszkowski seeks unspecified damages for assault and battery as well as slander, citing the actor’s comments about the incident on The Ellen Show in February.

‘On November 2, 2018, Mr Cieszkowski’s life changed forever because he dared to park his car in a public parking spot on a public street that Mr. Baldwin apparently believed he owned,’ a complaint submitted to the court on March 27 says.

‘Mr Baldwin verbally accosted Mr Cieszkowski, stood over his shoulder and yelled profanities at him, shoved him hard in the chest, and finally, struck him in the face.’

The complaint obtained by DailyMail.com claims the assault was ‘physically painful and psychologically traumatic’ to the plaintiff, who has suffered headaches, lost sleep and weight and missed time at work as a result.

It also says that the incident forced Cieszkowski ‘became a public personality at the center of a national media circus … overnight, and very much against his will’.

‘Cieszkowski did nothing wrong, and nothing to deserve the indignity of becoming forever known as “the guy Alec Baldwin assaulted over a parking spot”,’ the complaint reads.