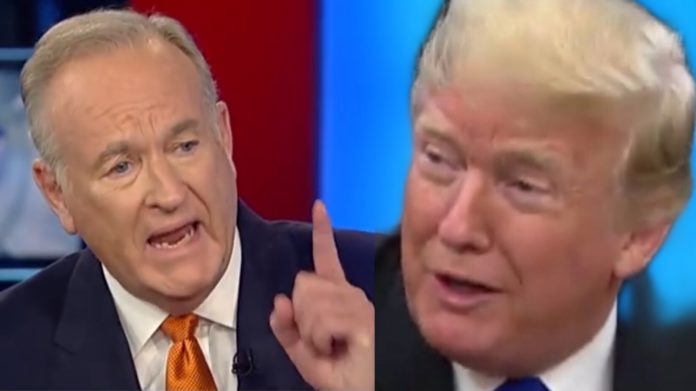 Bill O’Reilly came out swinging with a strong defense of President Trump and revealed that it is Trump who is getting the last laugh in his war with the media industrial complex.

The fake outrage, the barely noticed spin, the friendly hit pieces they run to settle scores - the media frames narratives in ways the average consumer does not know about yet somehow understands on an instinctual level.

Bill wrote: “Here’s how powerful President Trump really is: fake news, he made the phrase part of America.  The news media helped him by generally being unfair and blatantly dishonest, but Mr. Trump drove the point home with a vengeance.

And that’s the right word because both parties want to hurt the other.

While President Trump’s job approval numbers remain around 45 percent, the media’s favorability among Americans is plummeting.  The left-leaning Columbia Journalism Review polled 4,214 adults and found that the American press now ranks lowest among all major institutions in the USA.  Lower than Congress, even.

The poll goes on to say that 90 percent of Republicans believe the media is biased and 58 percent of Democrats agree.

Those are shocking numbers considering that after Watergate, the press was a glamour industry in America.

A recent Investors Business Daily poll found that 69 percent of Americans believe the news media “is more concerned with advancing its points of view than reporting all the facts.”

So Donald Trump’s withering criticism of the anti-Trump press seems to have taken deep root.

And here’s the thing: it is not difficult to cover a politician fairly, even if you don’t like the person.  Just gather facts, people, and don’t ignore the truth if it helps someone for whom you hold disdain.

Sounds simple and it is.

But here’s why that’s not happening.  TV News in particular makes big money off either hating or loving Mr. Trump.  Playing it straight down the middle does not motivate many viewers.  They want partisan displays to reinforce their beliefs and that’s what they get.

Newspapers are also slanting their coverage to an ideological base.  Not many conservatives buying The New York Times perhaps because the paper’s liberal columnists outnumber right-leaning scribes ten to one.

But the unintended consequence of that  editorial bias is the destruction of honest reportage.  Most folks now understand that and if the still don’t get it - the President is there to point it out.  Over and over and over.

The simple truth is that Donald Trump cannot fake it.  Even if the press does.”