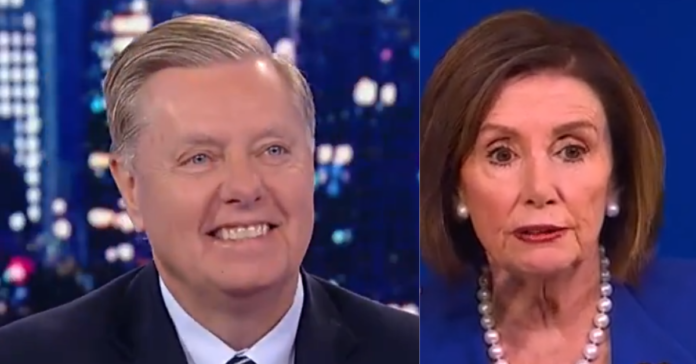 Lindsey Graham just shut down Nancy Pelosi over some of her weak comments about Iran. Pelosi trashed Trump on numerous fronts but her Iran comments caught Lindsey’s eye. He said,

“Speaker Pelosi’s statement that we should not be provocative towards Iran excuses Iran’s hostile acts throughout the region and the world and tries to place the blame on President Trump.”

“Not holding Iran accountable shows the ghost of Neville Chamberlain is alive and well in the Democratic Party.”

“As to Iran’s threats to accelerate their nuclear enrichment program, President @realDonaldTrump should not be AT ALL worried about trying to salvage the disastrous Obama nuclear deal.”

FAREED ZAKARIA, HOST: The Secretary of State says that the attacks on the two tankers in the — around the Straits of Hormuz were Iranian — done by the Iranian government. Do you think that we are in for a possible military confrontation between the United States and Iran?

NANCY PELOSI, SPEAKER OF THE U.S. HOUSE OF REPRESENTATIVES: Well, I certainly hope not. But we have absolutely no appetite for going to war, or to be provocative to create situations that might evoke responses, where mistakes could be made.

You know, it’s one — countries exercise their leverage. They threaten. They this or that. But there could be mistakes made, and that’s a very dangerous thing.

And if I just might just go back a little bit, what is his motivation? What is their motivation to be provocative with the Iranians? Why did the president turn his back on the Iranian nuclear agreement? What’s the logic except some other issue — that it was negotiated by President Obama? We had so many national security experts, whether they were ambassadors, generals, admirals and all the rest supporting the agreement as well, so it had official, diplomatic, national security, technical, nuclear, et cetera support along the way. So why?

So, then he comes in and does — undoes that and inflames the U.S.-Iran issue. Why? What is the purpose? And then to — I’m not going to accuse anybody of instigating anything, but for not having a policy that would smooth the waters so to speak. So again, I don’t — I think he probably knows there’s no appetite for war among the American people.

ZAKARIA: Let me ask you, though, about presidential power. Is there a kind of usurpation of congressional authority? Since 1976, when Congress declared a National Emergency Act, Gerald Ford signed it, there have been fifty — the presidents have declared 59 emergencies. 32 are still in place. We still have national emergencies in place about Macedonia, about Lebanon, about the Iran hostage crisis. Is it time for Congress to start much more seriously overseeing these kind of executive usurpations of power?

PELOSI: Yeah. I think Congress was — were accomplices in some of these things, but were dealing with presidents with whom we had shared values and to give the president the facility to do what he needed — or hopefully one day, she needed to do. But the — but it has gone too far. And you — if it’s a national emergency, it’s one thing. But if it’s to declare a national emergency that doesn’t exist, isn’t — is a exploitation of a — of an opportunity that shouldn’t be taking place.

ZAKARIA: He’s doing it with Saudi arms sales. There is a — there is an end run around Congress. Is there something you intend to do to prevent that, or to counter it?

PELOSI: We have a – no, Congress will vote against the arms sales to Saudi Arabia and the other countries too.

It’s unfortunate that the Emirates and Jordan — countries that had nothing to do with Yemen, to do with Khashoggi or to do with other things are caught in that, but it is what we have to address.

So, there will be a vote to remove any authority to make those sales to Saudi Arabia. But there’s something more about Saudi Arabia, and that is, this is nuclear technology that he is transferring to Saudi Arabia. So it runs into other acts of Congress that he must — that cannot be ignored. So this is going to be quite a discussion.

And you have to wonder, what’s with Saudi Arabia? Why of all the countries in the world did the president of the United States choose as his first country to visit Saudi Arabia? President Bush and President Clinton — all the presidents since Reagan went to either Canada or Mexico. There are plenty other allies that this president could have visited. What was the purpose of giving so much face to Saudi Arabia? Follow the money. What’s going on here? And there is a question of who is financially benefiting from the nuclear part of the sales to Saudi Arabia. So this is something that we will fight and we’ll have bipartisan support to fight.