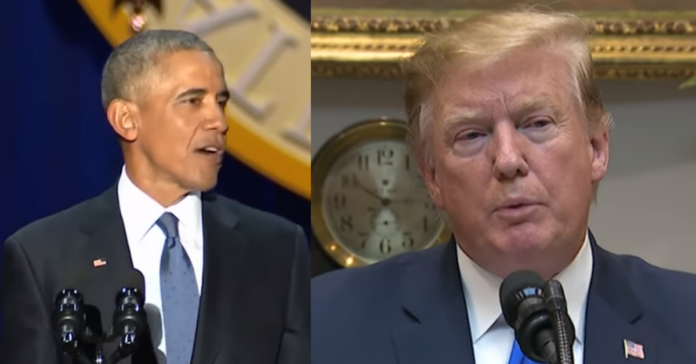 Barack Obama is back with a new plan to take down Trump in 2020. Obama remains popular with the base but not so much with the rest of the country so one has doubts as to how effective his new initiative will be.

That said, America deserves to see Trump and Obama go head to head in an election. We should make a deal with the left and change the rules so a president can serve three terms - so Obama can run against Trump and lose.

And then Trump can go on to serve three terms. He may need 12 years to clean up the mess from the last 50 years anyway.

The left would probably go for it such is their arrogance - they still think Hillary won and was robbed even though Mueller cleared Trump.

Trump would crush Obama by the way and it would not be close because Obama ran a similar outsider campaign as Trump but his promises have been exposed as shams.

America gambled on Obama and he did not follow through on his promises to stop offshoring and other key issues Trump would run on. Trump has credibility on these issues, Obama and Biden do not.

From The Hill: Former President Barack Obama and the Democratic National Committee (DNC) on Friday announced a new fund to support the eventual party’s 2020 nominee.

“I’m excited that the DNC asked me to announce a bold new effort: The Democratic Unity Fund. Launching today, the fund will be dedicated to electing our party’s eventual presidential nominee and winning up and down the ballot in 2020,” Obama said in the email.

“The Democratic Unity Fund is a promise that whoever earns our nomination, he or she will have a strong, united, and well-organized DNC ready to spring into action the moment the general election starts — a DNC that’s ready to lift us all to victory in November,” he continued.

The email comes after the DNC in 2016 faced accusations of tipping the scales in favor of the eventual nominee Hillary Clinton and against her primary challenger Sen. Bernie Sanders (I-Vt.), who is running again in 2020.

The DNC, now led by Obama’s former Secretary of Labor Tom Perez, has sought to introduce more transparency around the nomination process, especially around the dozen debates planned over 2019 and 2020.