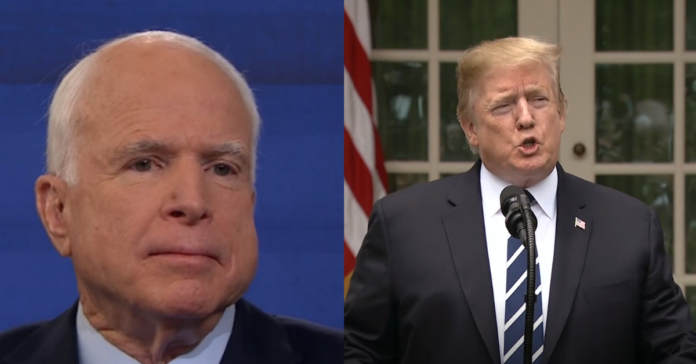 Amy, desperate to save her flailing career, tried to do so by revealing what John McCain was mumbling during Trump’s inauguration speech. Of course, he was trashing him from day 1.

The Minnesota senator told a group of around 200 supporters at Jasper Winery in Des Moines, Iowa, that she sat next to McCain and Independent Vermont Sen. Bernie Sanders during Trump’s inauguration.

Klobuchar “regularly mentions her friendship with McCain” on the campaign trail, HuffPost reported.

Klobuchar, speaking to a crowd of more than 200 at Jasper’s Winery, said she sat next to McCain, one of Trump’s most outspoken Republican critics, and Sen. Bernie Sanders (I-Vt.) during the inaugural address, which became known for its blunt expression of Trump’s authoritarian populism and invocations of “American carnage.”

McCain and Trump feuded frequently during the president’s first 18 months in office, and the president has continued to attack McCain since the senator’s death last August. McCain refused to endorse Trump during the 2016 campaign, and later attacked his approach to politics as a “half-baked, spurious nationalism cooked up by people who would rather find scapegoats than solve problems.”