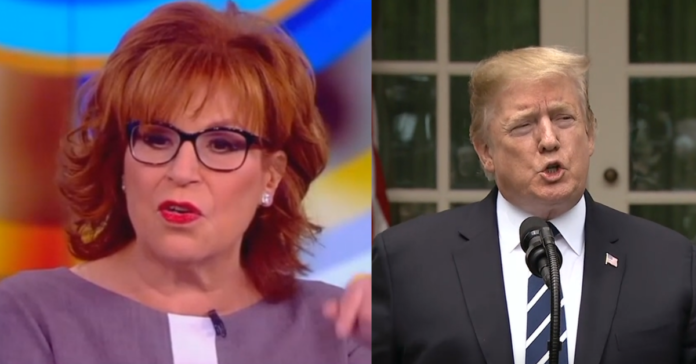 Joy Behar finally got censored by ABC. It is about time, they let her get away with darn near anything on “The View.”

Her jokes are always in bad taste and bad faith and she has a filthy mouth to match. Her main focus is to rip Trump or any Republican in the rudest way possible. It is about time the network started to make moves to keep her in check.

According to clips of Tuesday’s show posted by Mediaite, Goldberg was bleeped out for several seconds during a segment about Trump’s various insults for Democratic presidential candidates, with her and Behar expressing bewilderment over Trump attacking former Vice President Joe Biden as “Sleepy Joe.”

“I just think people are tired of it and —” Goldberg said of Trump’s insults before being bleeped out, with the other co-hosts and the audience laughing while her audio was cut out for several seconds before the show went to a commercial.

Then, during a discussion about Trump attacking former Vice President Joe Biden’s support for the controversial 1994 crime bill, credited with contributing to the mass incarceration of African-Americans, Behar was censored while calling out what she saw as Trump’s hypocrisy on racial issues.

Behar noted that not only did former New York City mayor and Trump’s personal attorney Rudy Giuliani support the law at the time, but Trump took out full-page ads in the New York Times calling for the death penalty for the so-called “Central Park Five,” a group of young black and Latino men falsely imprisoned and later exonerated for a rape they did not commit.

“Black people know about Charlottesville,” she said, referring to Trump’s controversial response to the white supremacist gatherings in the summer of 2017. “And they know about him saying that (bleeped out) and all the racism, and all the stuff that he says.”

From Mediaite: In each of the first two segments of the ABC daytime talk show, the audio was cut off for extended portions of the broadcast. First, Whoopi Goldberg was censored just as she threw to the show’s first commercial break. The audio cut out four times as Goldberg was blasting President Donald Trump for some of the insulting nicknames he has applied to his 2020 rivals.

Later, Joy Behar was cut off for two seconds during a rant about Trump trying to court black voters by attacking former Vice President Joe Biden over his role in getting the 1994 crime bill passed.