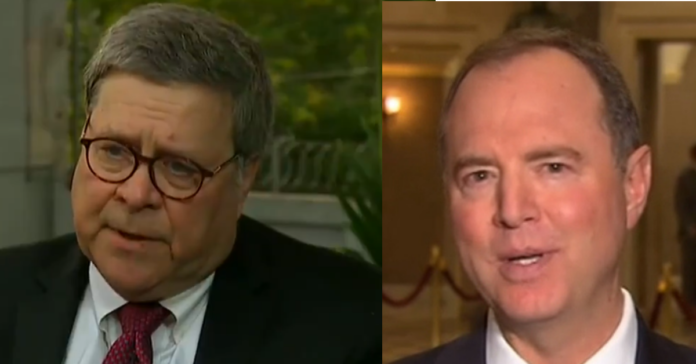 Bill Barr just laid down the law. He gave his first interview in ages to Fox and Bill Hemmer and went straight for the jugular of those who tried to take down Trump.

He said wants answers to some ‘very strange developments’ that happened during and after the election.

Look, Mueller came up empty but for two years the media - because they were fed leaks by the Democrats (Adam Schiff) - portrayed Trump as a traitor.

Now, after reading the full Mueller report we can pinpoint those leaks and realize how nefarious they were.

They selectively leaked, leaving out any context or information that exonerated team Trump, and literally created a false narrative about Trump and treason that stalled the nation.

It is dirty politics, but Barr thinks there were illegal leaks. From Fox News:

Attorney General Bill Barr, in an exclusive interview with Fox News, revealed that the recently announced review of the origins of the Russia probe will focus in part on a controversial briefing that intelligence officials gave President Trump shortly before he took office in 2017.

Barr told Fox News’ Bill Hemmer in the interview aired Friday that one portion of the review — which he has tapped U.S. Attorney John Durham to lead — would cover the time period between Election Day and Inauguration Day, saying “some very strange developments” took place during that time.

Barr specifically was referring to the early January 2017 briefing intelligence officials gave then-president-elect Trump at Trump Tower, and “the leaking of information subsequent to that meeting.” At that meeting, Trump was briefed by intelligence and law enforcement officials on Russian election meddling — and was also informed by former FBI Director James Comey about the now-infamous anti-Trump dossier which included salacious allegations against him. Details later leaked to the press.

“That’s one of the things … we need to look at,” Barr said of the briefing.

“It’s a very unusual situation to have opposition research like that, especially one that, on its face, had a number of clear mistakes and in a somewhat jejune analysis,” Barr said. “And to, and to use that, take it to conduct counterintelligence against an American political campaign is a strange—would be a strange development.”

The first step is to find out exactly what happened, and we’re trying to get our arms around that, getting all the relevant information from the various agencies and starting to talk to some of the people that have information,” Barr told Hemmer.

While the decision to look back at the origins of the investigation has prompted harsh criticism from Democrats who previously have accused him of acting as the president’s lawyer, Barr argued there’s much yet to learn.

“I think there’s a misconception out there that we know a lot about what happened,” he said.

“The fact of the matter is Bob Mueller did not look at the government’s activities. He was looking at whether or not the Trump campaign had conspired with the Russians. But he was not going back and looking at the counterintelligence program. And we have a number of investigations underway that touch upon it — the main one being the office of inspector general that’s looking at the FISA warrants.”

Hemmer then asked Barr about Pelosi claiming he lied to Congress and Barr fired back with a threat.

“It’s a laughable charge made to discredit me because they may be concerned about the outcome of a review of what happened during the election.”

Wow. AG Bill Barr basically threatens Democrats during his Fox News interview, says of those criticizing him that "they may be concerned about the outcome of a review of what happened during the election." pic.twitter.com/CvcTOUWQYo