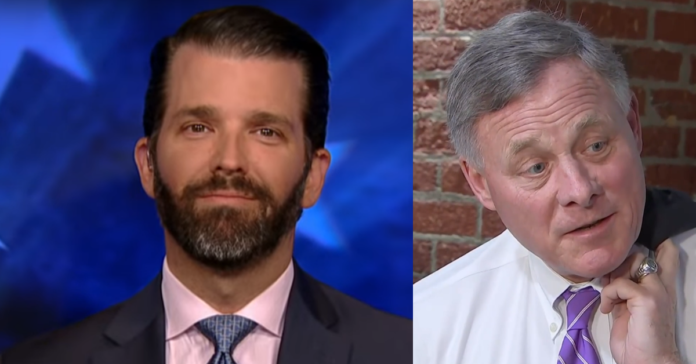 Don Trump Jr. just broke his silence on the shocking and totally surprising subpoena. Reports from the White House show that no one saw this coming, and worse, the GOP didn’t even have the courage to give POTUS a heads up.

Look, Mueller could have brought charges if they were warranted, and he did not so what do these Senators hope to gain from this move?

Trump won’t show up or he won’t answer the questions…so what is the real goal here? Don Jr’s people released a short and biting statement addressing the issue:

“When he originally agreed to testify in front of the Senate Intel Committee in 2017, there was an agreement between Don and the Committee that he would only have to come in and testify a single time as long as he was willing to stay for as long as they’d like, which Don did.

Don continues to cooperate by producing documents and is willing to answer written questions, but no lawyer would ever agree to allow their client to participate in what is an obvious PR stunt from a so-called ‘Republican’ senator too cowardly to stand up to his boss Mark Warner and the rest of the resistance Democrats on the committee.”

Don Trump Jr. then issued a series of cryptic tweets making his feelings clear. From the Daily Wire:

The first is a tweet by Republican Rep. Kevin McCarthy (CA), who wrote in response to the Axios story: “DonaldJTrumpJr has already spent dozens of hours testifying in front of Congressional committees. Endless investigations—by either party—won’t change the fact that there was NO collusion. It’s time to move on. It’s time to focus on ISSUES, not investigations.”

Trump Jr followed that retweet with another of McCarthy telling Democrats: “The Mueller Report is done. Let’s move forward. With the strongest economy that we’ve seen in 50 years, now is the time to work together to solve actual problems.”

Trump Jr.’s next retweetRepublican Sen. Rand Paul (KY), who tweeted in response to the Axios report: “Apparently the Republican chair of the Senate Intel Committee didn’t get the memo from the Majority Leader that this case was closed…”