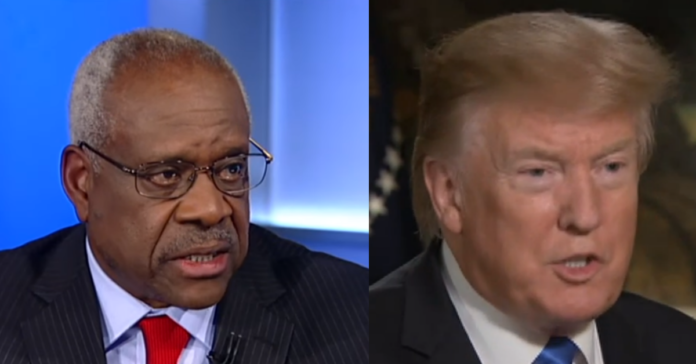 The sad fact of American political life is that we are divided along party lines as we have never seen before.

The party not in power then uses the courts to block the election winners agenda. This is what the Democrats are doing to Trump, the lawfully elected leader of this nation.

These judges are appointed and basically answer to no one, save the Supreme Court who can overrule the lower courts decision.

The GOP tried this tactic against Obama and were able to score some wins, but the Democrats have engaged in unprecedented obstruction using the courts.

The courts have their role, but Trump is furious that unelected judges can impose nationwide bans on his agenda. And he just unveiled a plan to stop this abuse of power and he has Clarence Thomas’ support.

From The Hill: President Trump is looking to stop lower courts from being able to issue wide-ranging injunctions in a move that could dramatically limit the authority of judges.

The plan comes as groups opposed to Trump have been able to get several of his policies, including those seeking to limit immigration, put on hold by nationwide orders issued by lower courts in battles that were eventually decided by the Supreme Court.

Advocacy groups that have pushed judges to issue nationwide injunctions say they are necessary to protect people from policies they see as harmful, and some legal experts agree, arguing that the right to issue such actions is protected under the Constitution.

But opponents argue that injunctions should be applied more narrowly to groups that are directly impacted, saying the more liberal use of injunctions is hurting the judicial system.

Vice President Pence this week brought the issue front and center, saying in a speech to the conservative Federalist Society that the administration has been “unfairly” targeted by injunctions — and promising to unveil in coming days pathways to put the issue before the Supreme Court.

“So I say to all those gathered here: For the sake of our liberty, our security, our prosperity and the separation of powers, this era of judicial activism must come to an end,” Pence said. “The Supreme Court of the United States must clarify that district judges can decide no more than the cases before them.”

Pursuing an end to nationwide injunctions would mark the latest attempt by President Trump to shape the federal courts after getting two Supreme Court justices confirmed and more than 100 of his judicial picks installed by the Senate.

Trump opponents have argued that nationwide injunctions are necessary to protect people who may not be part of a lawsuit but would nonetheless be impacted by a particular policy or legislation.

But other legal experts oppose nationwide injunctions. They argue that judges’ rulings blocking policies should apply only to those behind the legal challenge and that courts are overstepping their bounds by issuing wide-ranging injunctions.

Samuel Bray, a law professor at the University of Notre Dame who has been vocal in his opposition to national injunctions, said such sweeping orders “take the courts outside of their constitutional role.”

He argued that district courts were designed to rule on matters involving specific parties and not an entire nation. And if individuals in a lawsuit want the order applied nationally, Bray said, they could always file a class-action lawsuit to do so.

“Everybody in the class will win or lose together,” Bray said. And he noted that if one party loses its case for a national injunction before one judge “someone else can take another bite at the apple in another court.”

Nicholas Bagley, a law professor at the University of Michigan who is similarly opposed to nationwide injunctions, said policies that are challenged in court deserve to undergo a “robust” review in the courts and should not simply be put on ice by the ruling of a single judge.

“What I struggle with is why anyone would support handing to judges the authority to put a halt to important government programs just because they happen to get their knickers in a twist about a particular case,” Bagley said.

It’s unclear how the Supreme Court would rule if the question does land before it.

Justice Clarence Thomas, a conservative appointed by former President George H.W. Bush, has previously called for the Supreme Court to take up the issue of national injunctions if they continue to be used in the legal system.