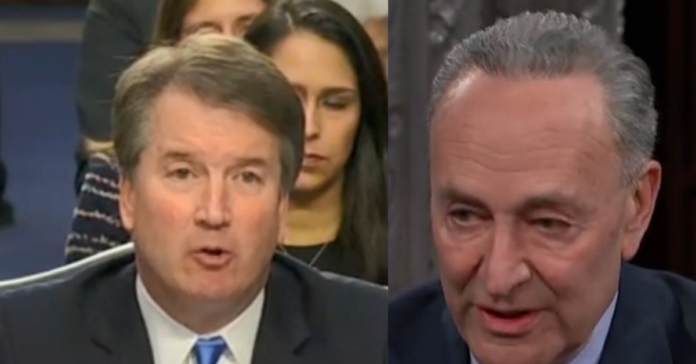 Another day another abject humiliation for the Democrats and Senator Chuck Schumer. The left is desperate for a win and they are blind to the truth, which will not end well for them.

They think the whole nation is resoundingly behind them, despite all the evidence to the contrary.

Remember, Trump picked up Senate seats in the last election, not lost them, and his poll numbers are shooting up as the economy booms. In other words, the Democrats are in for a rude awakening in the 2020 election.

From The Federalist Papers: Supreme Court Justice Bret Kavanaugh has humiliated the Democrats again and this time it was their own fault.

The Senate Democrats thought it would be wise to have a poll and ask Twitter users what kind of Supreme Court Justices they want in the future.

They asked if they would prefer more Justices like Justice Bret Kavanaugh or like Justice Ruth Bader Ginsburg and the vote did not go their way.

Justice Kavanaugh was trouncing Justice Ginsburg in the vote and the Democrats were being mocked mercilessly so they did the only thing they could do.

They deleted the poll. They never wanted to know what type of Justice Americans want, they wanted their choice to win.

They deleted the poll as the one thing Democrats do better than anyone is ignore votes that they do not win.

But if the idea was to not be mercilessly mocked, deleting the vote that was well documented did not do them any favors.

3. The @dscc has deleted this tweet after the results didn’t end up in their favor. pic.twitter.com/hb7IDdLMDi

That's not surprising, the Democrats haven't been willing to accept the outcome of a vote where they don't win since 2016. https://t.co/bznJ6budM1