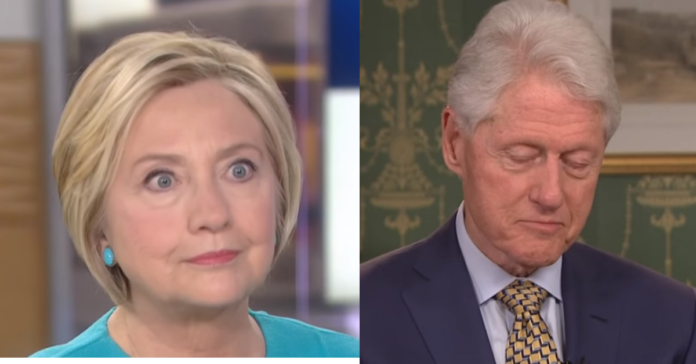 Bill and Hillary Clinton’s fall from grace was a long time coming. Look, say what you will about the Clinton’s, they came to embody, like perfect caricatures, the corrupt establishment.

They were the example Obama and Trump held up as to what happens when money and greed invade politics. (People forget Obama used the same message to beat Hillary in 08 that Trump used on her.)

They led the charge to deregulate Wall Street and send our manufacturing base overseas and got fabulously wealthy in the process.

So did their friends. And now some of them are breaking their silence and not surprisingly are stabbing them in back.

From Newsweek: One evening earlier this year, an old friend and adviser to Bill and Hillary Clinton sat down with the former president for dinner at a quiet Manhattan restaurant. Bill, the friend says, looked thinner and more tired than he had in some time. He is 72 now, 15 years on from open-heart surgery and the complications that arose from it. He was, the friend says, a “bit sad, and more than a bit angry.”

When Hillary insisted in a national television interview last year that her husband’s affair with White House intern Monica Lewinsky was not “an abuse of power” because “she was an adult,” the press reaction was scathing. According to three friends of the Clintons interviewed for this story (who were granted anonymity to speak candidly), the furor had a “profoundly depressing effect” on the first couple and all those around them who still like and support them.“It was just awful,” says one of the friends. “For Bill, it brought up all the bad times, and it showed yet again that Hillary just has no political fingertips. It couldn’t have been worse.”

Until that point, it had been an open secret in Clinton world that Hillary was at least considering another presidential run, though just how seriously is a matter of dispute. She was being urged on by Bill, according to two sources close to them, who was convinced she would beat Donald Trump in a rematch. To both of them, “Trump had been predictably awful. They felt that, even with a relatively good economy, he was very vulnerable.” And a lot of Democrats still wanted to make history by electing a woman, and both Joe Biden and Bernie Sanders (whose supporters would have been infuriated by another Clinton run) obviously didn’t fit that bill.“Did they want revenge? Of course they did,” says one former senior adviser. Either on the phone or at the occasional conclave at the couple’s home in Chappaqua, New York, Hillary would bat around the idea with close aides, including former chief of staff Cheryl Williams, 2008 presidential campaign manager Maggie Williams and aide-de-camp Philippe Reines.Some were less enthusiastic than others. In the first year or so after she lost to Trump, Hillary was somewhat insulated from the anger a lot of Democratic leaders felt toward her. That resentment was a subject Bill didn’t raise, although he was aware of it from his endless soundings of his national network of contacts in the party. Public polling or approval ratings didn’t provide much encouragement. A Gallup Poll in the fall of 2018 had her at 36 percent.

Still, for reasons that bewilder some of their friends, the Clintons continue to feel compelled to be in the public eye, to make themselves heard. Consider the recently concluded tour called “An Evening With the Clintons,” in which the two reminisced about their time in Washington. It began last fall at a sports arena in Toronto—a vast venue more appropriate for a Beyoncé concert than a political trip down memory lane. There were huge numbers of empty seats and large sections of the arena cordoned off by curtain. Ticket sales were slow, and the promoters had to cut prices in half. The entire evening was a debacle, and the tour was postponed.

But not canceled. Organizers booked smaller venues for the spring, lowered prices, and again the Clintons sallied forth: 13 stops across the country, ending on May 4 in Las Vegas, answering softball questions from factotums like former political adviser Paul Begala or celebrities like comedian Jordan Klepper, who, inexplicably, was chosen to host the Washington, D.C., event on April 27.Most of the program is legacy-burnishing: how smart they were; how they wanted to unite not divide; how they grew the economy for everyone, not just the rich. They riff about how they ended the war in Bosnia in the 1990s. “Bill, this is boring!” a heckler yelled at the New York event before being hustled out of the Beacon Theatre.

But the small-scale venues—many were still not sold out—and the cheaper prices speak to the very real cost of exile for the Clintons. Beyond the just-ended tour, their speaking fees have plummeted. After she left her job as secretary of state but before she declared her 2016 candidacy, Hillary used to make $200,000 per speech. In 2014, she spoke at eight different universities and pulled in $1.8 million.No longer. The head of one prominent public speakers’ agency, who didn’t want to be quoted on the record, says Hillary’s fees have come down sharply—particularly after a couple of post-2016 university speaking engagements (for which she was paid up to $300,000) sparked a fierce backlash. Since then, her fees have been as low as $25,000 or $50,000 per event.

Bill, because of the current political climate, doesn’t do many solo domestic gigs, though he can command $200,000 or more for foreign engagements. He just doesn’t do them very often because physically, an associate says, “he’s not up to it.” From 2001 to 2015, just before Hillary declared as a candidate, the Clintons made more than $150 million in speaking fees. “Those days are gone,” says the associate.