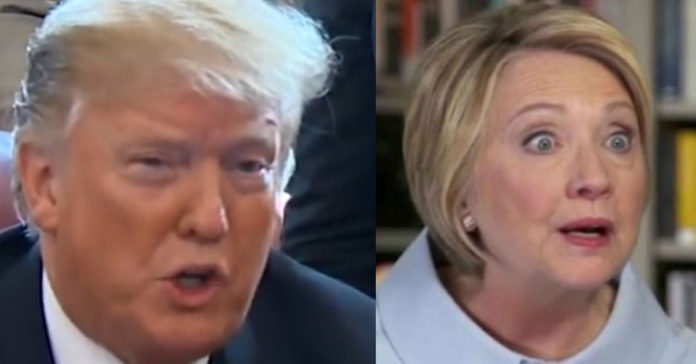 President Trump just made a prediction about tomorrow’s Mueller report release and Hillary and her deep state cronies should be terrified.

“He’s been a fantastic attorney general. He’s grabbed it by the horn,” Trump said of Bill Barr before telling a radio audience to expect some strong things to come out tomorrow.

Believe me, it won’t be about collusion or obstruction as Trump has been cleared. So reading between the lines, one can expect Barr to drop the hammer on the deep state and one hopes he opens a new special counsel into their malfeasance.

From The New York Post: President Trump said Wednesday Attorney General Bill Barr will hold a news conference Thursday following the release of his redacted version of special counsel Robert Mueller’s report on the Russia probe –and suggested he would chime in as well.

“You’ll see a lot of strong things come out tomorrow. Attorney General Barr is going to be doing a press conference. Maybe I’ll do one after that, we’ll see,” during a radio interview with Washington’s WMAL Larry O’Connor Show.

CNN later that Barr and Deputy Attorney General Rod Rosenstein would hold a news conference at 9:30 a.m., though it was unclear if that would precede or follow the release of the report.

Barr is expected to release the report to Congress and the public Thursday morning.

While the president has claimed that the nearly 400-page report “totally” exonerated him, Democrats aren’t buying it and plan to seek an unredacted copy of Mueller’s report, the culmination of a 23-month investigation.

Trump is leaving later Thursday for a long holiday weekend at Mar-a-Lago, his Florida resort, and usually stops to speak with reporters on the White House lawn before boarding Marine One for the first leg of his trip.