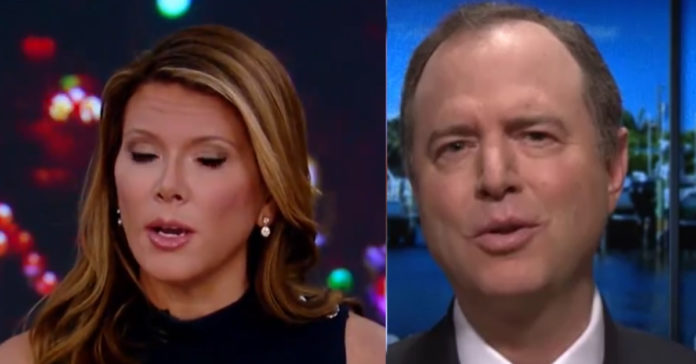 Fox Business Network’s Trish Regan, a friend of President Trump’s, just sent Adam Schiff scurrying back under the rock he crawled from to attack Trump.

Look, Schiff is still out there spewing conspiracy theories some like nutjob and the fringe on the left that believes this stuff is eating it up.

He will, it is clear now, use his position, he does have a powerful position, to harass and try to damage Trump politically.

Look, both sides do it but that doesn’t make it right. We are where we are as a country and Schiff has a choice, work for the common good and do America’s work or continue down his path of unprecednted presidential harassment.

Regan made the declaration in such a thorough beat down of the Democrat that she earned a show of gratitude from the president.

Schiff is chairman of the House Intelligence Committee, so a suggestion that special counsel Robert Mueller got it wrong carries weight — a suggestion that comes on the heels of an exhaustive 2-year investigation that burned through $30 million.

“So, Robert Mueller comes forward with no collusion and yet Mr. Adam Schiff has evidence of something else entirely?” the host of, “Trish Regan Primetime” asked on Thursday.

“It’s time for Congressman Schiff to show us that evidence, if he has it,” Regan added. “Put up or bow out, instead of going on television night after night to cast aspersions on the president without any kind of proof.”

“I’d like it if, maybe for just once, politicians could look out for the nation instead of themselves.” Regan said. “Adam Schiff says there is quote ‘evidence’ in [the Mueller report], then lets see it, sir, for goodness sakes! He hasn’t even seen the report. What kind of evidence is he citing? Is this the same evidence that [former CIA Director] John Brennan was citing? The man who now admits that he might have gotten some “bad information.”

“Stop it, just stop it with the politics!” she said. “If Adam Schiff and others could get their heads out of their … you know what for three seconds then they might realize that there is meaningful, positive reform that could be happening  for our country and the hundreds of millions of Americans living here in the way of immigration reform, trade reform, and more economic prosperity.”

As for Regan’s call for Schiff to step down if he doesn’t produce his evidence, Trump said as much last week irrespective of any so-called evidence

“Congressman Adam Schiff, who spent two years knowingly and unlawfully lying and leaking, should be forced to resign from Congress!” the president tweeted.