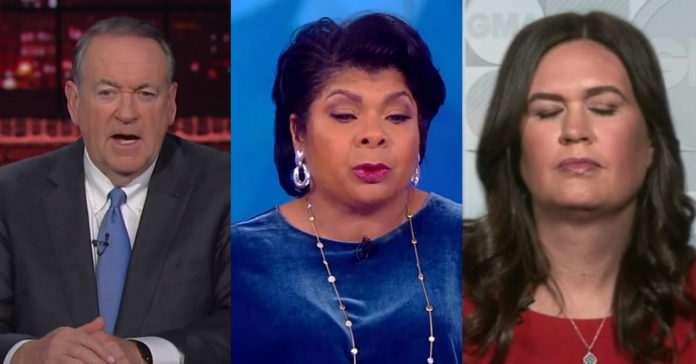 The media, always forgetting they live in glass homes, threw too many stones at Sarah Sanders after it came out in the Mueller report that she did her job and spun the news. Just like everyone in her position before.  From Red State:

It shows how petty and political much of the Mueller investigation was. Sanders saying the rank and file had lost confidence in Comey had nothing to do with Russian collusion or obstruction. It’s also a lesson in why talking to investigators is dumb unless you have to. They were clearly looking for any angle to entrap Trump associates and were clearly willing to deal in the irrelevant to do so.

Per Newsbusters, CNN’s April Ryan apparently took it personally and is now demanding Sanders be fired.

“Not only does she not have credibility, she lied. She out and out lied,” she declared as emotion welled up in her voice. “And the people, the American people can’t trust her. They can’t trust what’s said from the President’s mouthpiece-spokesperson from the people’s house. Therefore, she should be let go. She should be fired, end of story.”

The lack of self-awareness in that statement is comical. Ryan is a “reporter” who’s been caught fudging facts many times over the last two years. Her questions are always deeply biased and combative. Ryan even thought it smart to accuse Sanders of not actually baking a pie she tweeted about. As it turned out, Ryan was wrong and she later had to apologize for her ridiculous attack.

Not content with stopping her rant there, Ryan then took it a step further.

Things got very dark as Ryan rhetorically suggested that since there was “a lack of credibility there, you have to start and start lopping the heads off.” She added: “It’s fire me Thursday or fire me Good Friday. She needs to go.”

Can you imagine the outrage if a conservative commentator made such a statement about a Democrat? CNN doesn’t even bat an eye though. This is coming from the same people who insist simple disagreement is “inciting violence.” In fact, Ryan goes on to blame Sanders for threats against journalists after she suggested (checks notes)…Sanders’ head should be cut off.

Then on top of that, she says the press is fake when she’s faking reports from the people’s house. She’s calling us fake. We’ve had colleagues who have had to move from their houses because of threats. I have to have security because of being called fake and a loser and all sorts of things from that White House.

Logical consistency isn’t a thing for these people. The idea that calling out the press for false stories puts lives in danger is a farcical notion. But it’s accepted conventional wisdom at major networks and publications these days. Anything said against them is incitement and a threat to the 1st amendment. Yet, they can say whatever they want, get whatever stories wrong they want, and invoke imagery involving beheading Sarah Sanders and there’s no issue.

Will the ⁦@whca⁩ revoke April Ryan’s credentials? If not, they are gutless tools. CNN's April Ryan Says Sarah Sanders' Head Should Be "Lopped Off" https://t.co/8fdYiOzggf