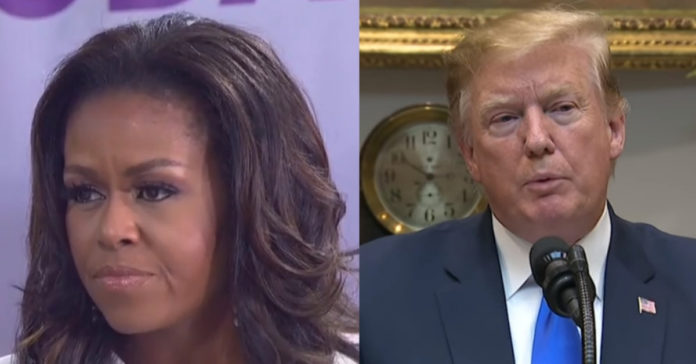 Michelle Obama just went on an unprecedented and quite vicious attack on President Trump before telling a crowd in London Barack would have won a third term if able.

“For anyone who had any problems with Barack Obama, let’s just think about what we were troubled by – there were never any indictments,” she told a London crowd.

“We come from a broken family, we are a little unsettled,” Mrs. Obama said. “Sometimes you spend the weekend with divorced dad. That feels like fun but then you get sick. That is what America is going through. We are living with divorced dad.”

“We were always ourselves – the presidency does not change who you are, it reveals who you are,” she added in what appeared to be another dig at the current president.

“It is like swimming in the ocean with great waves. If you are not a great swimmer, you are not going to learn in the middle of a tidal wave. You are going to resort to your kicking and drowning and what you knew how to do in the pool.”

“When I am not emotionally able to deal with it I turn it off for a moment,” she said. “I only let some of that stuff into my world when I’m ready. You can’t have a steady diet of fear and frustration coming in.”

“This may feel like a dark chapter but any story has its highs and lows but it continues. Yes, we are in a low but we have been lower. We have had tougher times, we have had more to fear. We have lived through slavery, the Holocaust and segregation.”

“We have always come out at the other end – better and stronger. We are moving in a direction of diversity and inclusion. No-one ever said it would be easy. We are just in the throes of the uneasy path of change.”

“It’s a time for us to roll up our sleeves and if we are not happy with the state of things then, in democracies, we have votes. We have to pay attention and we have to be engaged and we can’t take our rights and liberties for granted. Because if we don’t vote, somebody will.”

She added: “There was a time when people accused me of not loving my country. They accused me of being loud and rude and obnoxious.”

The she reminded the crowd Barack was elected twice before saying Obama would have beaten Trump.

“That really did happen. People would have voted for him for a third time. What is going on today is true but what happened before was also true. That should give us some solace at some level. For eight years, the president they saw in their country was Barack Obama. He was somebody who people thought was smart and would do the right thing,” she said.

Here is Michelle Obama comparing Trump to a “divorced dad” on stage in London last night and Stephen Colbert even doing a hilarious apparent impression of the president @MichelleObama @L8ShowColbert #iambecoming pic.twitter.com/F3OgggWpVW