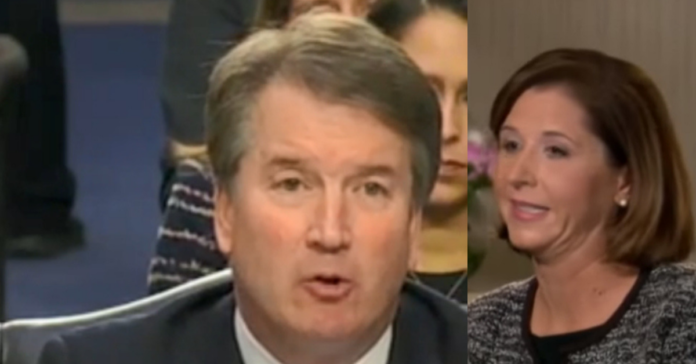 The left just crossed the line. This is getting out of hand. The goons on the left will never forgive Brett Kavanaugh for being a conservative and they still believe his seat should have been Hillary’s.

They orchestrated a coordinated smear job that was surprisingly effective. It smeared but did not stop. But the hit job almost worked save Lindsey Graham’s late-inning heroics.

The left will never get over it. They want to smear Kavanaugh and call him illegitimate in their attempt to get Brett removed. Won’t happen, can’t happen and they know it.

Which makes this all about hurting him personally. And his wife and children. They are just out to destroy his reputation - remember one law school already said it didn’t want him to teach over the controversy.

From The Free Beacon: A dark money progressive organization hoping for a leftward turn on the courts is targeting Justice Brett Kavanaugh with advertisements, suggesting the Court is illegitimate following his elevation last October.

“Brett Kavanaugh’s performance during his testimony in front of the Senate was a disgrace. His blatant partisan attacks and hostile behavior towards senators calls into question his ability to serve as a fair and impartial judge. His conduct undermines the legitimacy of his decisions and the entire Supreme Court,” the ad reads.

“We’re calling on Congress to open an investigation into Kavanaugh right now.”

Other ads by the group Demand Justice alleged there was “overwhelming evidence that Supreme Court Justice Brett Kavanaugh committed perjury during his confirmation hearings before the Senate” and also urged George Mason University to “fire” Kavanaugh from teaching a summer course at the Virginia school.

Unlike most other political players in this arena, Demand Justice is neither a political action committee nor a nonprofit.

“Instead, Demand Justice operates as an unincorporated entity organized by a tax-exempt fiscal sponsor,” said a recent report from the Center for Responsive Politics.

“That sponsor is a 501(c)(4) nonprofit named Sixteen Thirty Fund, which provides a legal home and steers money from secret donors to more than 40 different unincorporated entities that are consequently not required to file separate tax returns or other incorporation documents.”

Another recent report, this one by the Capital Resource Center, estimated that the Sixteen Thirty Fund had shepherded about $1.6 billion from donors to the various organizations under its umbrella.

Many of the ads have been targeted in states with early caucus or primary votes in the 2020 presidential race.

For example, one ad from Demand Justice that dredged up the sexual assault allegations against Kavanaugh during his contentious senate confirmation was targeted to run exclusively in New Hampshire, South Carolina, and Nevada, all of which are early on the 2020 presidential voting calendar.

Here is one ad: