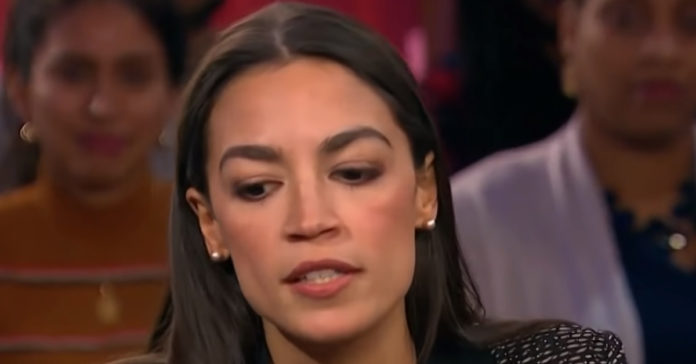 Rep. Alexandria Ocasio-Cortez (D-NY) is in big trouble in her home district and she absolutely deserves it.

Most Americans are turned off when their Representatives showboat and grandstand nationally while turning their backs on their local district.

AOC is clearly the poster child of this bad behavior and very wealthy GOP candidates are lining up to take her down.

From The Daily Wire: Multiple Republican candidates are gearing up to try to remove socialist Rep. Alexandria Ocasio-Cortez (D-NY) from office in 2020 and donors, including a “multimillionaire mystery donor,” in New York City are prepared to help them in their efforts.

“Ocasio-Cortez’s surging national profile has inspired a trio of Republican opponents from her home district — along with a multimillionaire mystery donor who could help close the gap in her foes’ long-shot race against her,” The New York Post reported. “Just three months after taking office, the Democratic socialist congresswoman’s challengers include an Egyptian American journalist, who has already tossed her hat in the ring, and an NYPD cop-turned-high-school-civics teacher and conservative talk-radio producer, both of whom are seriously exploring a run against her.”

Bronx Republican Chairman Mike Rendino told The Post that there is “definitely national energy and money on this race” and that an individual that is “worth over $200 million” and has “connections to raise money in Manhattan” is heavily invested in removing Ocasio-Cortez from office.

“[Ocasio-Cortez] chose ideology over paychecks,” Papazian told The Post. “People need jobs. We don’t have economic diversity in the outer boroughs. The Green New Deal is a job-killer.”

“She completely ignores the people in this district,” Papazian said. “I’ve lived here my whole life. I know the heart and soul of this community. The people here have scratched and clawed their way into the middle class, and they’re not about to be impoverished with the high taxes it will take to make the Green New Deal and Medicare for All.”

Former NYPD Officer John Cummings, who is a U.S. government high school teacher, is also interested in hopping into the race to knock off Ocasio-Cortez.

“I know it’s a difficult road because this is a heavily Democratic district,” Cummings said. “She’s only interested in a national platform, and we need local representation.”

Another Republican, Rich Valdes, who worked for former New Jersey Governor Chris Christie and then worked for Mark Levin, launched an exploratory committee in February and says Ocasio-Cortez’s initials could stand for “ambition over constituents.”

“They’re really, really kind of discouraged at the fact that she was elected on this platform of representing the district because she ran against Crowley, positing him as being no-show, and she’d turned out to be very much the same way a no-show person,” Valdes said.