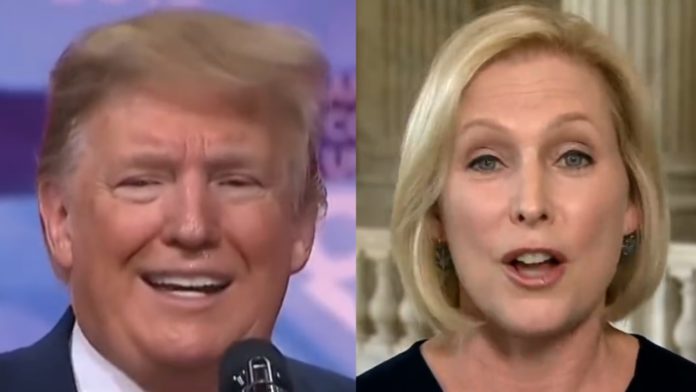 Sen. Kirsten Gillibrand (D-N.Y.) just got a massive karmic kickback and it will undoubtedly sink her 2020 campaign.

Gillibrand - by the way she is from a powerful New York family and is very swampy - ever the political opportunist helped run Al Franken out of town over a few pictures.

The metoo movement demands such nonsense from its adherents and what is good for Franken will ruin her.

Turns out she was hiding some sexual shenanigans of her own by her staff and one poor woman had to resign because of it.

There is zero tolerance on the left from this stuff, especially for Gillibrand, so if she survives this the entire movement is just a hypocrites ploy to get Dem votes.

Sen. Kirsten Gillibrand (D-N.Y.), one of the most outspoken advocates of the #MeToo movement who has made fighting sexual misconduct a centerpiece of her presidential campaign, spent last summer pressing legislators to update Congress’ “broken” system of handling sexual harassment.

At the same time, a mid-20s female aide to Gillibrand resigned in protest over the handling of her sexual harassment complaint by Gillibrand‘s office, and criticized the senator for failing to abide by her own public standards.

In July, the female staffer alleged one of Gillibrand’s closest aides — who was a decade her senior and married — repeatedly made unwelcome advances after the senator had told him he would be promoted to a supervisory role over her. She also said the male aide regularly made crude, misogynistic remarks in the office about his female colleagues and potential female hires.

Less than three weeks after reporting the alleged harassment and subsequently claiming that the man retaliated against her for doing so, the woman told chief of staff Jess Fassler that she was resigning because of the office’s handling of the matter. She did not have another job lined up.

The woman was granted anonymity because she fears retaliation and damage to her future professional prospects.

“I have offered my resignation because of how poorly the investigation and post-investigation was handled,” the woman wrote to Gillibrand in a letter sent on her final day to the senator’s personal email account. Copied were general counsel Keith Castaldo and Fassler, who is now managing the senator’s presidential bid.

“I trusted and leaned on this statement that you made: ‘You need to draw a line in the sand and say none of it is O.K. None of it is acceptable.’ Your office chose to go against your public belief that women shouldn’t accept sexual harassment in any form and portrayed my experience as a misinterpretation instead of what it actually was: harassment and ultimately, intimidation,” the woman wrote.

Since she left last summer, the woman has been doing part-time contract work. The male aide, Abbas Malik, kept his job.

POLITICO reached out to more than 20 former Gillibrand staffers to see if there was a pattern of behavior by Malik, including the two aides the woman specifically asked the office to contact.

One of those two former staffers said Malik often called her fat and unattractive to her face and made light of sexual abuse. She recalled one instance in which Malik remarked that a particular woman they were talking about “couldn’t get laid unless she was raped.” The person did not report that behavior at the time but now says she wishes she had.

Two more staffers who worked for Gillibrand said the woman’s claims of Malik’s inappropriate workplace behavior matched their own experiences. They said Malik regularly made misogynistic jokes, frequently appraised what they wore, disparaged the looks of other female staffers and rated the attractiveness of women who came in for interviews.

Wow, this has to sink her - she literally ran Al Franken out of town for doing far less than her top staffer did…unreal, the Democrats are such hypocrites.