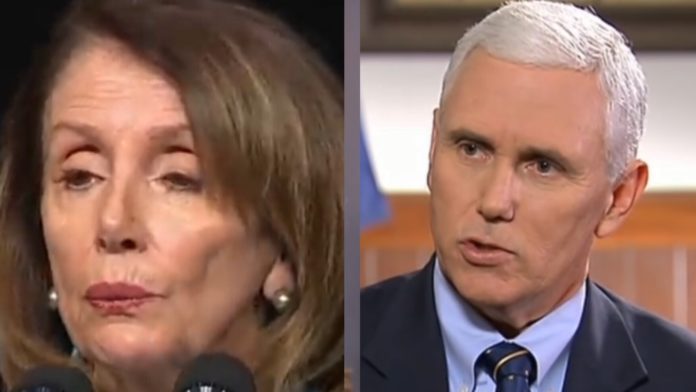 Nancy Pelosi has a mean streak - don’t let her carefully cultivated persona fool you. She knows how the game is played and in fact, was raised in machine politics. Her father was  Mayor of Baltimore.

Pelosi knows how the power game in DC is played and for all her aw-shucks antics she is a ruthless Washington power broker.

She will buy support from her caucus by handing out goodies or she will threaten to ruin a defector by withholding money and help from their re-election efforts.

All told we should have seen this move by Pelosi coming.

Vice President Mike Pence has lost his office space in the House after a real estate reshuffle by the new Democratic majority.

Pence was given the office space in early 2017 in a symbolic gesture by former Republican House Speaker Paul Ryan after President Trump’s inauguration.

Before becoming vice president, and Indiana governor, Pence served 12 years in the House and was close with Ryan and fellow GOP leaders.

In recent weeks, the placard in the House identifying the space as Pence’s office has been removed. Pence rarely visited the office, as the vice president is tasked with presiding over the Senate.

Pence has an office in the Senate chamber he typically uses while on Capitol Hill. Pence has one formal Senate role, to break a tie vote. Pence has used his Senate office more broadly to lobby Republican lawmakers on Trump administration priorities.

A House Democratic aide told NPR that the space would be reassigned. Though Pence won’t have his own office on the House side, the aide said that Pelosi would provide new space for the White House legislative affairs team, who did not have an office under the previous Congress’ House Republican majority.