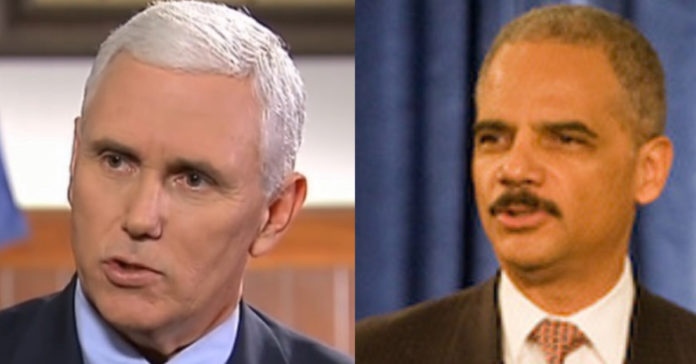 Holder, mimicking the worst Democrat apologists is willing to throw the baby out with the bathwater and in that way comes across as someone who actually hates America.

While far from perfect, and compared with those around us, history will judge America nothing short of a miracle.

This Mike Pence reminded the hapless Holder when he landed his knockout blow in a short Twitter war.

Obama’s Attorney General Eric Holder on Wednesday appeared on MSNBC, where host Ari Melber asked him: “There is a lot of talk about America being a leader as a democracy, quote unquote, in the 1800s when women and African-Americans couldn’t vote. What kind of democracy is that?”

Holder lit into America with a vicious question for Trump supporters. “Exactly when did you think America was great?”

Melber asked Holder if he thought Trump’s 2016 campaign slogan — Make American Great Again — was racist. “Does that phrase echo as discrimination in your ears?” “It takes us back to what I think, an American past that never in fact really existed. This notion of greatness,” Holder said.

So, the vice president mulled these words for a bit, then — without saying a word, using only Holder’s quote — completely annihilated Holder.

.@EricHolder: “Exactly when do you think America was great?” pic.twitter.com/pFE5z5D756

Those are at least four times America was pretty “great” — George Washington crossing the Delaware during the Revolutionary War as he led troops against Hessian forces; Marines hoisting the American flag at Mount  Mount Suribachi during the Battle of Iwo Jima in World War II; Americans landing on the moon and planting Old Glory; and Martin Luther King, Jr., delivering his “I Have a Dream” speech at the Lincoln Memorial.

Holder, knowing that he’d been fully p’wned, responded in a tweet, saying, “America IS great,” and “can-and must-be greater still,” but that the “Make America Great Again” slogan means “YOU think America is not great now-and is backward looking.”

America IS great. And can-and must-be greater still. “Make America great again” means YOU think America is not great now-and is backward looking. America is at its best when we look forward, embrace an uncertain future and make it ours. That is what defines American greatness https://t.co/ASagCEPMZ5