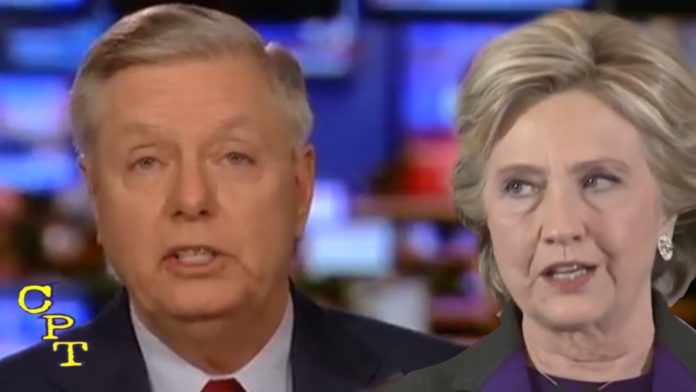 Lindsey Graham is done playing around and just demanded a special counsel be appointed to look into Hillary Clinton and the many scandals still swirling around her.

Wow. Hillary for one must be devastated by the news because Lindsey holds a very powerful chairman position and may be able to get this done.

Lindsey said he said he’ll introduce legislation to establish that investigation which will surely have support in the GOP controlled chamber.

“There’s more than smoking guns here. There’s overwhelming evidence that somebody outside the political system should look into,” he said.

Lindsey tweeted out: “House-passed Mueller resolution should be amended to include appointment of a Special Counsel to:

*) Investigate alleged misconduct around the handling of the Clinton email investigation.

*) Investigate the abuse of the FISA warrant process against Mr. Carter Page.”

“Mr. Mueller has been allowed to do his job. It is past time for someone to look at the other side of the political coin.”

I believe we owe it to the American people to look at ALL potential misconduct related to 2016 campaign investigation, not just some.

From Fox News: Among their texts was one concerning the so-called “insurance policy.” During her interview with the Judiciary Committee in July 2018, Page was questioned at length about that text — and essentially confirmed this referred to the Russia investigation while explaining that officials were proceeding with caution, concerned about the implications of the case while not wanting to go at “total breakneck speed” and risk burning sources as they presumed Trump wouldn’t be elected anyway.

Further, she confirmed investigators only had a “paucity” of evidence at the start.

Then-Rep. Trey Gowdy, R-S.C., kicked off that section of questioning by asking about the text sent from Strzok to Page in August 2016 which read: “I want to believe the path you threw out in Andy’s [McCabe’s] office—that there’s no way he gets elected—but I’m afraid we can’t take the risk. It’s like an insurance policy in the unlikely event you die before you’re 40.”

The former FBI lawyer explained how the FBI was trying to strike a balance with the investigation into the Trump campaign—which agents called “Crossfire Hurricane.”