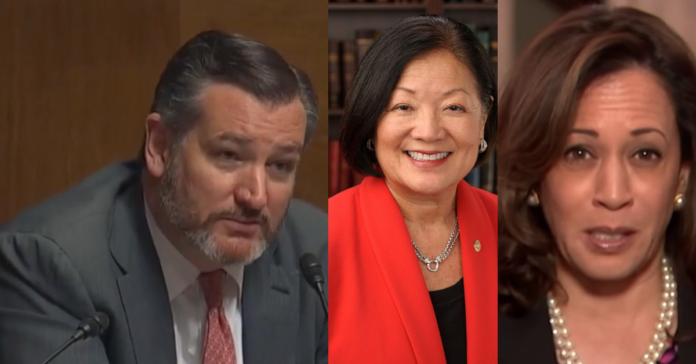 Ted Cruz sat back and watched the Democrats beclown themselves on national TV today. The hearing with Attorney General Bill Barr turned ugly and contentious and quickly devolved.

The mud was slung and while there were no direct hits on Bill Barr, plenty of damage was done to the desperate Democrats.

Enter Ted Cruz to call them out on what they did. From Mediaite:

“Let me start by just saying thank you,” said Cruz as he began his remarks. “You’ve had an extraordinarily successful legal career, you didn’t have to take this job.”

“You stepped forward and answered the call yet again,” he said, “knowing full well that you would be subject to the kind of slanderous treatment, the Kavanaugh treatment, that we have seen, of senators impugning your integrity, and I for one am grateful that you answered that call, and are leading the department of justice, both with integrity and fidelity to the law.”

“I think this hearing today has been quite revealing to anyone watching it, although perhaps not for the reasons some of the Democratic senators intended,” Cruz said, eyeing his colleagues. He said that after two years of investigation and “extreme rhetoric” and even “calling the president a traitor”, the word “Russia” barely came up in questions asked by Democrats.

“Instead,” he said, “the principal attack that the Democratic senators have marshaled upon you concerns this March 27th letter from Robert Mueller, and it’s an attack that I want people to understand just how revealing it is. Because if this is their whole argument, they ain’t got nothing.”

Cruz then set out to summarize the way he sees the Democratic argument. After confirming a timeline with Barr, Cruz said “their entire argument is: General Barr, you suppressed the 19 pages that are entirely public, that we have, that we can read, that they know every word of it, and their complaint is it was delayed a few weeks.”

“And that was because of your decision not to release the report piecemeal but rather to release those 19 pages, along with the entire 448 pages produced by the Special Counsel,” said Cruz.

“If that is their argument, I have to say that is an exceptionally weak argument,” he continued, and Barr laughed. “Because if you’re hiding something, I’ll tell you right now, General Barr, you’re doing a very lousy job of hiding it. Because the thing that they’re suggesting you hid, you released, to Congress and the American people.”

“And so if anyone wants to know what is in those 19 pages that are being so breathlessly, ‘oh, Bob Mueller said release the 19 pages’–you did,” said Cruz. “We can read every word of the 19 pages, along with the full report.”

“In your judgment, was the Mueller report thorough?” Cruz asked.

.@tedcruz days Bill Barr has gotten the "Kavanaugh treatment" today during a hearing with the Senate Judiciary Committee.

"… senators impugning your integrity. And I for one am grateful that you answered that call and are leading the department." pic.twitter.com/dA5JG7qD7H