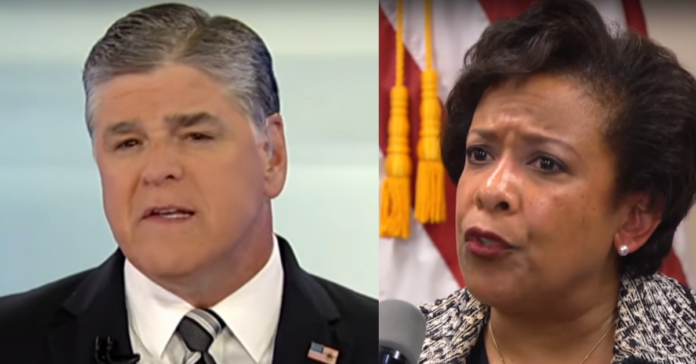 Sean Hannity came out firing last night and the deep state is terrified. Sean has unprecedented access to the top levels of the White House so when he talks, or in this case leaks, people listen.

According to Sean, Bill Barr is about to see the IG report about the Russia affair and it is devastating for those at the top.

Now, all the attention will go to Comey and Brennan and Strozk, but Loretta Lynch is the one on the hot seat. She approved everything and her signature will be on the documents. If it was a political hit the buck will stop with her or maybe even with Obama, but be assured, someone will go down for this.

He made the assertion during his evening program on Wednesday and asked Sen. Lindsey Graham, R-S.C., if he also had heard any word on the investigation.

Graham, whose Judiciary Committee had been conducting his own FISA abuse inquiry, said he could not verify if Inspector General Michael Horowitz is done, but added that he expects the eventual report to be upsetting to anyone who cares about the rule of law.

Hannity first brought up the prospect of Horowitz’s investigation being complete earlier in the show, speaking with Fox News legal analyst Gregg Jarrett and former Rep. Jason Chaffetz, who is now a Fox News contributor.

“I have sources telling me that Horowitz perhaps is even finished with his report and certainly the attorney general has been briefed on what is coming,” Hannity said. He also referred to former U.S. Attorney Joe diGenova saying Horowitz determined that the three FISA extensions against onetime Trump campaign aide Carter Page were illegally obtained and was on the brink of finding the first FISA was completely illegal.

The completion of Horowitz’s investigation would be news. Attorney General William Barr recently predicted that it would be complete in either late May or June, but there has been no official word of its progress since.

Horowitz announced his investigation in March 2018 in a statement that said his office was examining the Justice Department’s and FBI’s compliance with legal requirements as well as policies and procedures in applications filed with the U.S. Foreign Intelligence Surveillance Court related to Page as part of a larger counterintelligence probe into President Trump’s campaign.

Horowitz also said he would “review information that was known to the DOJ and the FBI at the time the applications were filed from or about an alleged FBI confidential source. Additionally, the OIG will review the DOJ’s and FBI’s relationship and communications with the alleged source as they relate to the FISC applications.”

This “alleged FBI confidential source” is British ex-spy Christopher Steele, who authored the unverified dossier on Trump’s ties to Russia that was used by the FBI in the Page warrant applications.

Horowitz can recommend that people be prosecuted. Jarrett noted that U.S. Attorney John Durham, whom Barr has tasked with reviewing the origins of the Russia investigation, could then “subpoena people to haul them in front of a grand jury. I suspect there is a grand jury and they’re well on their way to potential criminal indictments.”