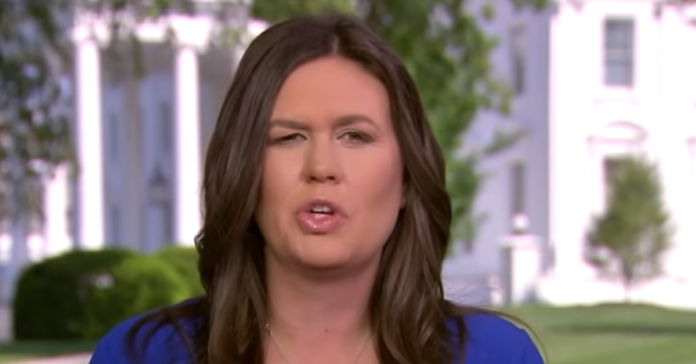 Sarah Sanders just made her move and did some spring cleaning at the White House. Specifically, Sarah revoked press passes of many malcontents in a purge that has the media howling.

Sarah said the rules mandating you have to be “physically present at the White House for your job 90 or more days in a 180-day window of time” to get a press pass are for security.

It should be noted she has made some exceptions to accommodate special cases but make no mistake, Sarah has every right to do this.

From Newsguts: Washington Post reporter Dana Milbank learned this week that his permanent pass was being revoked.  It’s a press pass he’s held for 21 years:

The White House eliminated most briefings and severely restricted access to official events. And this week came the coup de grace: After covering four presidents, I received an email informing me that Trump’s press office had revoked my White House credential.

Milbank goes on to say:

I’m not the only one. I was part of a mass purge of “hard pass” holders after the White House implemented a new standard that designated as unqualified almost the entire White House press corps, including all seven of The Post’s White House correspondents.

White House officials then chose which journalists would be granted “exceptions.” It did this over objections from news organizations and the White House Correspondents’ Association.

The new policy has been met with some confusion and even worry among journalists, some of whom suspect that the ultimate aim is to keep critics in the press away from the White House and President Trump.

White House press secretary Sarah Sanders explicitly denied that, saying the changes were prompted by security concerns, not to punish journalists. “No one’s access is being limited,” she said Wednesday night.

But Milbank says the White House isn’t being up front about this new policy:

White House officials offered me and others it disqualified a lesser credential called a six-month pass. They say it will grant equivalent access, but for various technical reasons, that isn’t true.

Must-read from @Milbank on the radical changes to how the White House is handing out press passes. All six of the Post's White House correspondents had their passes revoked and reinstated under "exceptions." https://t.co/exMqPlwXGH pic.twitter.com/k1AJAshet6