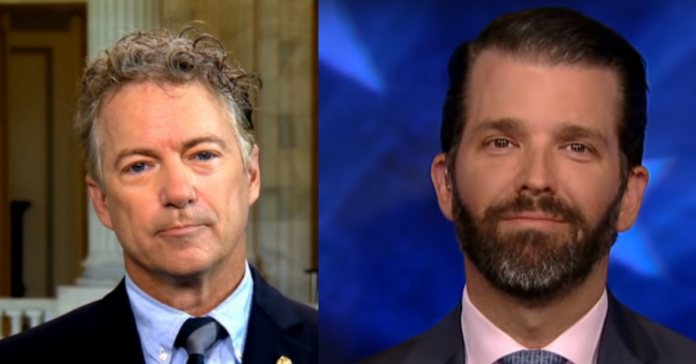 Rand Paul just dropped the hammer on certain members of the GOP who are still going after the Trump family.

He correctly called what is going on a travesty of justice. Wow, strong words from a US Senator. From The Hill:

Sen. Rand Paul (R-Ky.) slammed the Senate Intelligence Committee for subpoenaing Donald Trump Jr. for further testimony in its investigation into Russian interference in the 2016 election, suggesting it could end up being a perjury trap.

For the Senate to be calling up the president’s son and putting him in jeopardy by bringing him in and grilling him… I think it’s really a tragedy,” Paul said Sunday on John Catsimatidis’ radio show.

“This is not a friendly maneuver. This is an adversarial maneuver to bring him in under oath. And the Democrats will try to trip him up and get him to make some kind of mistake.

From a Democrat perspective this is a chance to go after the Trump family and try to trick them into some kind of misstatement that then [Trump Jr.] is prosecuted for,” he added.

Trump Jr.’s past comments to the committee have come under scrutiny after Michael Cohen, the president’s former lawyer, told lawmakers that Trump Jr. was more involved in business efforts to build a Trump Tower in Moscow than he previously suggested.

Paul, an outspoken Trump loyalist in the Senate, went after Sen. Richard Burr (R-N.C.), the chairman of the intelligence panel, for asking for further testimony from Trump Jr., who answered the committee’s questions in 2017.

“I thought most Republicans knew that this was a witch hunt and the witch hunt is over,” Paul said. “The Republican senator from North Carolina is the head of the intelligence committee, Richard Burr. He may have his reasons. I just disagree with him. I think the investigation is over. The case is closed.”

Paul was the first Republican senator to come out against Burr’s decision. He was followed by a slate of other Trump allies, many of whom cited Senate Majority Leader Mitch McConnell’s floor speech declaring “case closed.”

“Apparently the Republican chair of the Senate Intel Committee didn’t get the memo from the Majority Leader that this case was closed,” Paul said in a tweet.

Apparently the Republican chair of the Senate Intel Committee didn’t get the memo from the Majority Leader that this case was closed… https://t.co/jvV5PIX266