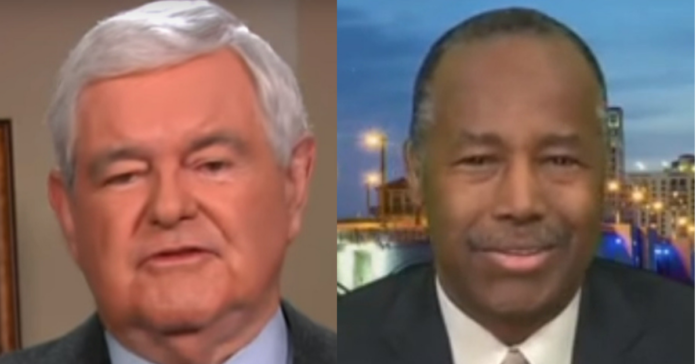 Ben Carson has been under constant assault from the left and their friends in the media for the cardinal sin of being a conservative African American.

Ben cuts through all the noise and delivers the truth and the truth they hate him for it. And the truth is that our government wastes money while doing great work. Moreover, the sad truth we must face is that wait times to get public housing is soaring, hurting poor Americans who need it the most. Ben made the bold move to try to fix the system by removing illegal immigrants from illegally getting access and the left went nuts. Newt wrote,

“In a bold move, Housing and Urban Development Secretary Ben Carson is both helping poor Americans and enforcing the law.

Some in Congress may consider enforcing the law and prioritizing help for poor Americans (including people who immigrated to the U.S. legally) over help for people in the country illegally controversial or unacceptable. The solution for their position is for Congress to change the law. Until then, it is pretty hard to complain that a cabinet officer is enforcing the law which Congress wrote.

Helping poor American families is a core mission of the HUD. One lifeline HUD extends to vulnerable families is housing assistance.

Yet, 75 percent of Americans eligible for housing assistance – many of whom are children, seniors, or persons living with a disability – are prevented from receiving the financial aid to which they are legally entitled.

In fact, millions of qualified American families are stuck on waiting lists that have unending queues – the average of which stretch on for years.

In Los Angeles, Calif., the waiting list is more than four years long. In Miami-Dade County, Fla., thousands have been waitlisted since July 2008 – more than a decade. In other localities, such as Orange County, Calif., and Orlando, Fla., Since 2015, public housing authorities have decided to simply close their waiting list and abandon new applications altogether.

In effect, thousands of Americans are being discriminated against in favor of people who are here illegally – or are unlawfully receiving taxpayer aid they do not deserve and should not be getting.

HUD Secretary Ben Carson has investigated this injustice and discovered that HUD has long been prohibited from granting federal funds to people in the country illegally. That prohibition – which Congress enacted, and Congress has the power to change – includes a mandate to end assistance whenever a leaseholder knowingly allows a person in the country illegally to reside in HUD-supported housing.

These rules constitute more than a mere functional necessity for law and order; they are a moral necessity for any nation that takes care of its own vulnerable citizens. After all, public assistance is paid for and subsidized by taxpayer dollars.

But these crucial rules are easily skirted by a loophole that lets people in the country illegally who are living with qualified residents declare themselves “ineligible.” This means they do not have their immigration status checked, and they continue to live in taxpayer-funded housing.

If members of Congress do not like how the law is being enforced, then they should change the law. Until that happens, federal agencies, like HUD, should continue to do its own constitutional duty and enforce the laws as written by Congress.

Today, to assist agencies in the enforcement of existing – and binding – law, legal status can be easily verified through a fast, secure, and efficient screening, using the SAVE system of the U.S. Citizenship and Immigration Services. This screening process is already used by one-third of public housing agencies and needs only to be expanded to end the “illegible” loophole.

To this end, last week, HUD unveiled a proposal that would require all residents living in HUD-supported housing who are under the age of 62 to be screened through the SAVE system. It is a simple, egalitarian amendment that promises to restore proper enforcement and accountability to supplement the spirit of existing law.

As a result, the new measure HUD has championed is a meaningful step toward protecting our nation’s forgotten men and women and promoting the rule of law. There is no legitimate reason – or any excuse – to keep hundreds of thousands of American families waiting in line, when a lifeline could be extended instead.”