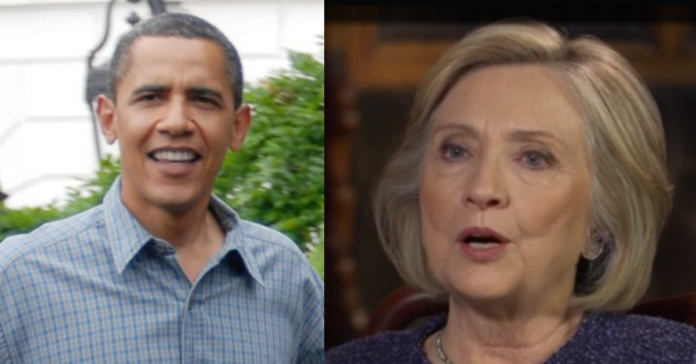 Barack Obama has finally come clean about his true feelings for Hillary Clinton and for President Trump. No surprises how he feels about POTUS (he hates him) but even Hillary was shocked by what Obama said about her.

Barack flat out embarrassed Hillary to her crooked core. Look, we now know that there is a high chance the deep state, in horror after Trump won, tried to sink him with the Russia investigation.

And now we know it was all BS, for one because Mueller found nothing, but more importantly because Obama came clean in a new book and blames a soulless Hillary Clinton for blowing the election and putting his legacy at risk.

From The Daily Mail:  Barack Obama admitted ‘this stings’ after the 2016 election result and spent the night watching the movie Dr. Strange to try and distract himself, a new book claims.

The former president went from being confident that Hillary Clinton would beat Donald Trump to seeing it as a ‘personal insult’ that she lost.

Obama could not believe the American people had ‘turned on him’ for a man he had written off as a ‘cartoon’.

As the dust settled Obama told his family that ‘this hurts’ and blamed Clinton who ‘brought many of her troubles on herself’ and ran a ‘scripted, soulless campaign’.

The eye-popping details are in the new edition of ‘Obama: The Call Of History’ by New York Times chief White House correspondent Peter Baker.

The book was originally released in July 2017 but has been updated with extensive new reporting throughout Obama’s time in office - and the run through of election day is electrifying.

Obama was cordial to the president elect in their face-to-face meeting in the Oval Office,  but in private Obama  called Trump a conman straight out of Huckleberry Finn.

Obama even likened himself to Michael Corleone in the Godfather movies and said he was handing power over to somebody who would destroy his legacy.

As Obama saw it he ‘almost got out’ of the White House unscathed just like the mob boss nearly survived without being whacked.

Baker writes that Obama woke up on the morning of November 8 2016 convinced he would ‘not be handing the nuclear football over to Donald Trump - the reality television star, he thought, was a joke’.

Obama arrogantly thought there was ‘no way Americans would turn on him’ even though Clinton was far from perfect.

Baker writes: ‘She was a serious and seasoned professional who had served at the highest levels of government and provided mature leadership. Just as important, she would continue his policies and cement his biggest achievements.

‘His legacy, he felt, was in safe hands’

Obama told one aide: ‘I’ve got the economy set up well for him. No facts. No consequences. They can just have a cartoon’.

In a stinging passage Baker writes: ‘To Obama and his team, however, the real blame lay squarely with Clinton.

‘She was the one who could not translate his strong record and healthy economy into a winning message.

‘Never mind that Trump essentially ran the same playbook against Clinton that Obama did eight years earlier, portraying her as a corrupt exemplar of the status quo.

‘She brought many of her troubles on herself. No one forced her to underestimate the danger in the Midwest states of Wisconsin and Michigan.

‘No one forced her to set up a private email server that would come back to haunt her.

‘No one forced her to take hundreds of thousands of dollars from Goldman Sachs and other pillars of Wall Street for speeches.

‘No one forced her to run a scripted, soulless campaign that tested eighty-five slogans before coming up with ‘Stronger Together’.

Former President Barack Obama was unhappy with Hillary Clinton and her failed “soulless campaign” in 2016, saying he saw her loss as a “personal insult.” https://t.co/RHsbFnWKwR