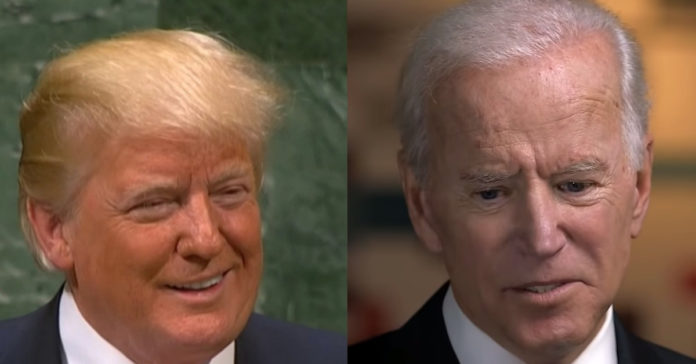 President Trump is funny. People like funny. Trump is also irreverent and in today’s politically correct culture people really like that.

The left is reacting in horror to Trump’s new attack on Biden, but they are just missing the point. Trump is having fun and he is as good as a politician as we have ever seen.

The Democrats have no idea what they are in store for in the next campaign. From Politico:

President Donald Trump on Thursday mocked Joe Biden by sharing a doctored video of the former vice president creeping up on himself and grabbing his shoulders, using the video Biden had posted a day earlier to address allegations of unwelcome contact.

The video posted on the president’s personal Twitter account pokes fun at Biden’s pledge to be more respectful of people’s personal space.

“I shake hands, I hug people, I grab men and women by the shoulders and say you can do this,” Biden says in the video, with images of the former vice president creeping behind him and getting closer to himself.

The video, which was shared to Trump’s 59.5 million followers, goes on to edit an image of Biden grabbing the potential 2020 candidate’s shoulder during his continued remarks.

The edited image in the video appears to be taken from a viral image of Biden holding the shoulders of Stephanie Carter, the wife of former Secretary of Defense Ash Carter. Stephanie Carter recently said she was comfortable with the interaction.

Along with the video tweet, the president wrote: “WELCOME BACK JOE!”

Trump earlier in the week mocked Biden over the allegations, claiming on Tuesday that the accusations against the former vice president were being planted by “socialists” — possibly alluding to Sen. Bernie Sanders of Vermont, who is running for the Democratic nomination.

“It looks like the only non-, sort of heavy socialist, he is being taken care of pretty well by the socialists,” Trump said Tuesday at the spring fundraising dinner for House Republicans’ campaign arm.

“They got to him. Our former vice president. I was going to call him — I don’t know him well,” the president continued. “I was gonna say, ‘Welcome to the world, Joe. Are you having a good time, Joe?’”

Dan Scavino, White House director of social media and assistant to the president, first shared the altered video on Twitter late Wednesday evening, as well as on his Instagram story. The video was first promoted on a Twitter account called Carpe Donktum, which describes itself as an account that shares memes in support of Trump.

“Looks like @JoeBiden will spend a ton of time apologizing for being Creepy, weirdly Cloying, and downright Crooked,” he wrote in a tweet.