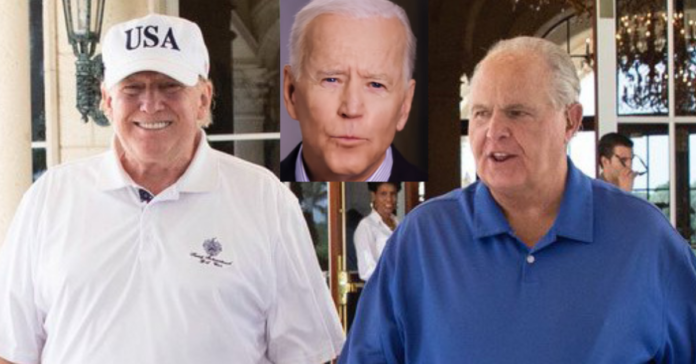 Rush Limbaugh does not suffer liberal fools easily. Never has and never will. He has built a solid reputation over the years taking on the powers that be and in that way creates a unique bond with his audience.

They wanted to hear about golfing with Trump, which Rush did last week, so he gave them a few stories before smacking Joe Biden around.

And if you have a bad round, it can really tick you off. If you’re not hitting the ball well, it can really make you mad, at yourself. You get mad at yourself. And then everybody else revels when you’re screwing up because that redounds to their benefit.

None of that, when you play with the president. He is the best host. He of course understands hospitality like no one else. But I’ve had as much fun playing golf with President Trump as I have with anybody else because no matter how anybody’s playing, it doesn’t matter. It’s just being out there and having a good time with all kinds of fun conversation about whatever comes up.

Lexi Thompson from the LPGA tour was in our group last Friday, and she’s astounding. She’s 24, 25 years old. She hits the ball 300 yards. She is one of these people who is just a born athlete. She is just incredible and sweet and nice as she could be. She was the only woman in the group. Didn’t faze her. We had Dana Quigley, who is recently retired from PGA Tour, played in something like 200 plus tournaments in a row.

There’s breakfast beforehand, you have lunch afterwards, about seven, eight hours, and it is a thorough, front-to-back good time. He has the ability to make everybody in his group enjoy the moment, the time that you are on the golf course with him. And, of course, he’s hilarious.

He brags about his course all the time. Every hole is better than any hole on any other golf course. Every lake is better than any lake or ocean on any other golf course. Every waterfall is the best waterfall in golf. And if there’s a better one, it’s at one of his other courses. You don’t stop laughing. You literally don’t stop laughing.

He’s got indefatigable energy, and he plays well. He shot great on Friday. He was hitting the ball 260 yards, 275 yards off the tee. And it’s funny. He never picks up the tee. One of the rules of golf is you pick up the tee after you’ve hit your tee shot. He just leaves it there. So I used his tee. I followed him on every hole, so I just used his tee. He just walks away, doesn’t even watch his shot land, just turns around and walks back and starts talking to the other people in the group.

If somebody hits a bad shot, hits it out of bounds, he says, “Hit it again, we’re out here to have a good time, don’t sweat it.

the best thing I can tell you is Donald Trump, if you haven’t met him and you want to, you won’t be disappointed.

He is everything that you would want him to be when you meet him. He’s everything that you would hope. He’s not arrogant, he’s not stuck up, he’s not distant. He has this ability to make whoever he’s talking to feel like they’re the only person in his attention span. That takes a lot of energy. I’m actually amazed at the amount of energy that he’s got. He never stops.

And he’s always focused on everybody else in the group and making sure that they’re enjoying themselves and having a good time. Anticipates what you want, what you need, and has it for you if he thinks that you would like it.”

Rush took a few well-deserved shots at Joe Biden earlier in the day.

"He's run for President twice … he hasn't ever gotten close. Biden is seen as the closest thing they can get to recapturing the days of Obama. They can't get out of the past." pic.twitter.com/usmg3O5o2y