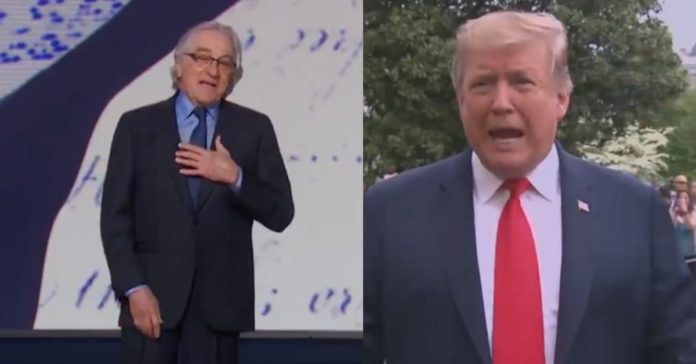 Robert De Niro just unleashed a vile and obscene attack on President Trump. Look, we have or we had a decency line in American culture - but the left has removed the line any anything is fair game.

Look what they did to Kavanaugh? Did you hear what Joe Behar said today about Trump? That he was responsible for the synagogue shooting.

It is a tragic shame they have to act this hysterical way because one day we will need America to come together and you just can’t deal with these people.

From Fox News: Academy Award-winning actor Robert De Niro unloaded – once again – on President Trump during a brief appearance Friday at the Not the White House Correspondents’ Dinner in Washington, D.C.

De Niro has been an outspoken opponent of Trump. In December, the 75-year-old actor told CNN that Trump’s tenure in the White House will be “one of those things” that people will look back on years from now and recall, “Remember all that stuff, how terrible it was?”

De Niro told the audience on Friday that he stood with host Samantha Bee to support the First Amendment, and “the right of the president to be a relentless and unrepentant, lying scumbag, the right of his supporters to not give a shit, and our right to do something about it.”

Robert De Niro made an appearance at the Not the White House Correspondents’ Dinner in Washington D.C. Friday night, roasting Donald Trump by calling him an “unrepentant, lying scumbag.”

“I’m happy to stand with Samantha Bee tonight to support the First Amendment – the right of the president to be a relentless and unrepentant, lying scumbag, the right of his supporters to not give a shit, and our right to do something about it,” De Niro told the crowd.

The actor, a vocal critic of the president who has appeared as Robert Mueller on Saturday Night Live, also said he was in anticipation of “the exquisite release” of voting the president out of office in 2020.

In his speech, De Niro addressed the idea of “fake news” saying how much he “loved it.” “If I get a bad review, fake news. Some nosy reporter finds out I never finished high school, fake news. Then the president stole my phrase. You might say he moved in on it like a bitch. All that, fake news. Turns out it’s real news or as we in this room call it: news,” he told the audience.