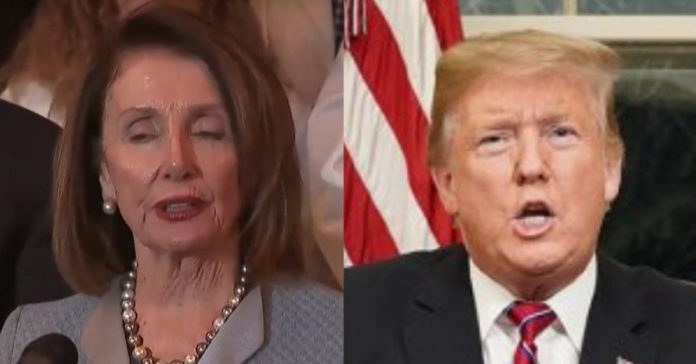 Nancy Pelosi is testing her luck with President Trump. It is widely known that Trump checkmated the Democrats with his America first policies.

The Democrats forgot their base, the rust belt, the unions, etc., and instead chose to chase the corporate money.

But it wasn’t just the money, they sat by and actively helped gut the unions that once ran this country.

The rust belt never forgave them and took a chance on Trump. And boy did he deliver - by sheer force of will he has made multiple companies move here and others rethink their offshoring. More needs to be done but do you think Hillary could have delivered as Trump has for these key swing state voters? No one does, least of all Pelosi.

A key part of this is Trump’s new NAFTA. The new trade deal has much-needed protections for the American worker and that has Pelosi terrified.

Because Pelosi fears losing the rust belt forever, she is throwing a monkey wrench in Trump’s new NAFTA and is setting up a showdown with POTUS.

In an interview with POLITICO Playbook, the California Democrat explained that Mexico must pass labor law reforms required under the replacement deal for NAFTA — and she wants to see the implementation before the House considers backing the new deal, a top Trump administration legislative priority.

“Unless you do this, we can’t even consider it. … We have to see that [Mexico passes] the legislation, that they have the factors in place that will make sure it’s implemented and they demonstrate some commitments in sincerity, because it’s a big issue how workers are treated in Mexico,” she said.

Pelosi’s comments are her clearest indication yet the deal will not face a quick vote in Congress, despite the Trump administration’s desire to get it passed by summer. In recent months, the administration has been increasing its efforts to get the U.S.-Mexico-Canada Agreement passed before the 2020 election campaigns go into full swing.

Some House Democrats have already expressed a desire to reopen the agreement to make changes tied to the enforcement of its labor and environmental standards. Democrats also have expressed concern about provisions they say could lock in high prescription drug prices.

Pelosi indicated that she agrees changes must be made to the text of USMCA to ensure it is enforceable.

Pelosi began to say that she is optimistic before saying, “it’ll take some time.”

“We have to see the evidence of what’s happening, not only that they pass the bill [in Mexico], but that they implement the policy,” she said.