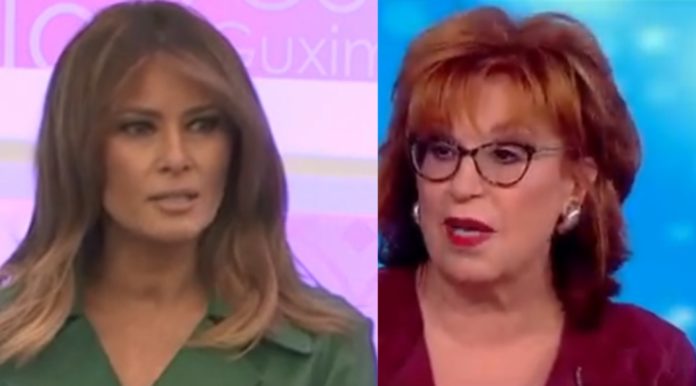 Melania Trump is swinging back at the ladies on the View after they ran another Melania bashing segment.

Melania famously asked the media to focus on real issues and less on gossip and Joy Behar did not listen. The internet went nuts over another fake Melania rumor and rather than debunk it or ignore it, Joy and the girls broadcast it as a way of taking a few shots at the Trump’s.

Melania, who rarely addresses these hit jobs in person, had her spokeswoman smack the View back to reality and wipe that arrogant smirk off Joy’s face.

A spokeswoman for Melania Trump ripped “The View” as “shameful” and said the ABC News program laughs in the face of tragedy after a segment exploring whether or not there is a body double for the first lady.

Co-host Joy Behar explained that “some people think the first lady is using an impostor” during public appearances, pointing to a viral conspiracy theory that is labeled with the hashtag #FakeMelania. The ABC News gabfest then displayed tweets in which people speculate that a stand-in actress replaces the president’s wife on occasion.

Behar announced that one particular image of the first lady didn’t look like the real thing.

“I wasn’t going to go along with this but that one, in that picture, doesn’t look like her,” Behar said. “It’s a different shaped face.”

Co-host Sunny Hostin then admitted she recently spent an hour trying to get to the bottom of the Internet rumors.

“Melania is a very tall, statuesque woman and the one that we saw, the first one that we showed, she looks kind of short,” Hostin said. “Look how short she looks.”

Behar said the conspiracy theory has caught on because there is “an element of truth” to the idea that the first lady doesn’t enjoy spending time with her husband. CNN’s Ana Navarro, who is a regular fill-in on “The View,” said the whole thing was “absurd” but she finds it comical and urged viewers to partake.

White House director of communications for the first lady, Stephanie Grisham, noticed the segment and took to Twitter to condemn the ABC News segment.

“[email protected] & @potus traveled to Alabama to pay their respects & comfort victims of the tornado devastation. In typical fashion, @theview chooses to laugh in the face of tragedy. Shameful,” Grisham wrote.

.@flotus & @potus traveled to Alabama to pay their respects & comfort victims of the tornado devastation. In typical fashion, @theview chooses to laugh in the face of tragedy. Shameful. https://t.co/KzG2c4Th4a