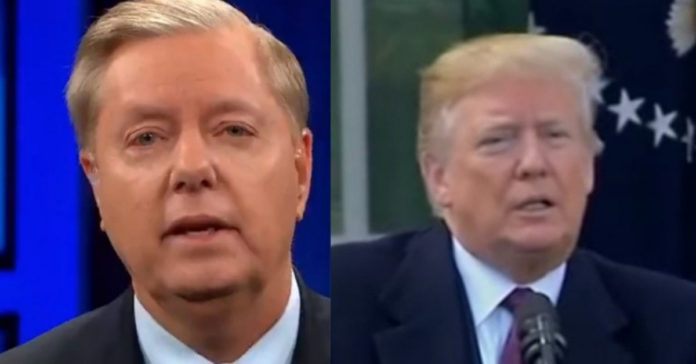 Lindsey Graham has finally responded to a series of attacks by President Trump against his good friend John McCain.

Trump blames McCain for spreading the Steele dossier around Washington and for giving it to the FBI. Lindsey Graham has been under fire for not stepping up and defending McCain. From Yahoo:

In a tweet Saturday, Trump accused the late Republican senator of spreading “the fake and totally discredited Dossier.” And quoting Ken Starr, the independent counsel who investigated President Bill Clinton, he called the late war hero’s connection to the dossier “a very dark stain against John McCain.”

Starr, on “Fox and Friends” Saturday, said, “I think he was an American hero. But I’m very sorry he got implicated in this in terms of spreading this very nasty stuff around.”

The unverified 35-page dossier, which was leaked to media and published by BuzzFeed in January of 2017, alleges the Trump campaign colluded with Russia to defeat Hillary Clinton in 2016 presidential election. It had been reported that McCain was involved in disseminating the leaked dossier, which was compiled by former British spy Christopher Steele. The Steele dossier was one of the starting points of special counsel Robert Mueller’s investigation. Mueller is believed to be preparing a report for the attorney general. A resolution recommending that Mueller’s report be made public was approved by the House unanimously last week.

“So it was indeed (just proven in court papers) ‘last in his class’ (Annapolis) John McCain that sent the Fake Dossier to the FBI and Media hoping to have it printed BEFORE the Election,” Trump followed up in a tweet Sunday.

Recently unsealed court documents show that an associate of McCain, former State Department diplomat David Kramer, had shared copies of the dossier with BuzzFeed and other media outlets.

But this was not “BEFORE the Election,” as Trump boldly claimed, because Kramer testified he only was briefed on the dossier by a former British diplomat on Nov. 19, 2016, nearly two weeks after Election Day. McCain had also been briefed and then in the following weeks gave the reports alleging conspiracy between the Trump campaign and Russian government to former FBI Director James Comey.

McCain defended his decision to brief Comey, writing in his book, “The Restless Wave: Good Times, Just Causes, Great Fights, and Other Appreciations,” that he “did what duty demanded.”

“I discharged that obligation, and I would do it again,” McCain wrote. “Anyone who doesn’t like it can go to hell.”

As to @SenJohnMcCain and his devotion to his country: He stepped forward to risk his life for his country, served honorably under difficult circumstances, and was one of the most consequential senators in the history of the body. (1/2)

Nothing about his service will ever be changed or diminished. (2/2)