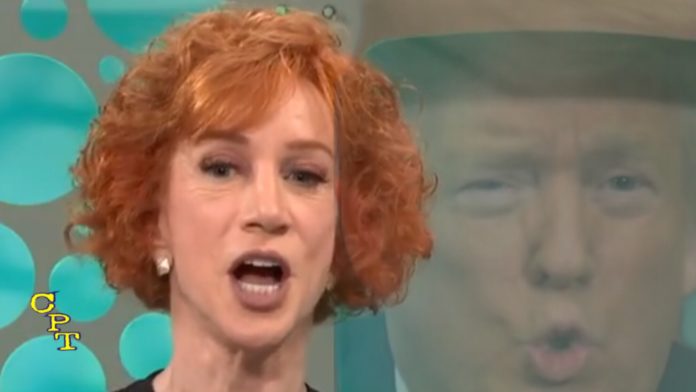 Kathy Griffin is back and just as annoying as ever. She is whining across all media, to anyone who dares listen, that she is still blackballed from Hollywood.

Like a broken record, Griffin cannot stomach the fact that her career has taken a hit and the ex-reality star has been kicked off the D-list.

“Never in the history of the United States has a sitting president used the power of the Oval Office, the first family, the right-wing media, and the Department of Justice to try to make an American citizen unemployable and uninsurable for an absolute non-threat that was covered by the First Amendment,” Ms. Griffin told The Daily Beast in an interview published Tuesday.

She called it being thrown into “the Trump woodchipper,” the outlet reported.

Ms. Griffin said she learned something important through her experience: “It turns out there is such a thing as bad publicity,” she joked.

“There was such a disconnect,” she said. “I’m selling out the Sydney Opera House, and I’m not even on TV anymore.

I sold out Carnegie Hall in 24 hours. I started just DM-ing showrunners and literally saying, ‘Can you just give me five lines? I need America to know that I’m not in ISIS and didn’t decapitate anybody.’ The answer has been no. I’ve reached out to so many people. I can’t do it anymore.”

Ms. Griffin said there’s “undeniable misogyny” in what’s happened to her compared to other celebrities such as Johnny Depp and Peter Fonda who have made over-the-line comments about the president and his family.

“I am hoping, frankly, more women come around, because, and this is not going to be popular, it’s that dark side of feminism: When the chips are down, bros before hos,” Ms. Griffin said.

“Guys still stick together like cops. Republicans are like that, too. Women, when the chips are down, we tend to fracture. When I read that 53 percent of white women voted for Trump…I’m not even talking to white bitches anymore. What the fuck is wrong with them?”