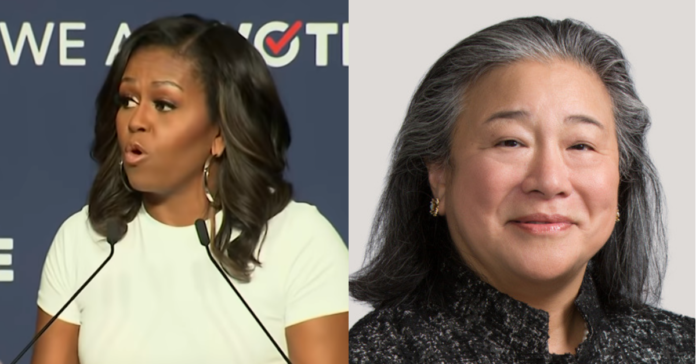 The plot thickens around the miscarriage of justice that is the Jussie Smollett case. Jussie was guilty, no one disputes that.

Except for Jussie, who in a display of arrogance never seen in America before, somehow worked a deal that not only allowed him to walk free and have all charges dropped, but also allowed him to tell the media he was exonerated with no pushback from the authorities.

They let Smollett and his lawyers make the official announcement to the media and did nothing when Jussie falsely claimed he was innocent.

The fix was in said many a Chicago insider for how else to explain this strange case? Well, it just got stranger because Michelle Obama’s former top aide who has been accused of being the fixer just dodged a subpoena…

Tina Tchen, the former chief of staff to first lady Michelle Obama, declined Wednesday to be served with a subpoena by a retired Illinois judge seeking the appointment of a special prosecutor in the Jussie Smollett case, according to the process server.

In an email to former Illinois appellate judge Sheila O’Brien obtained by Fox News, the process server wrote that a security guard at the Chicago law firm where Tchen is a partner “called up to her and spoke with her and she said that she in [sic] never going to accept service and to not allow me up to their Law firm.

“She knows all about this Subpoena,” the server added.

Edward Ryan, who runs the private investigation firm that employs the process server, spoke about the incident with The Chicago Sun-Times.

“I don’t know why she’d turn it [the subpoena] down, she’ll be served eventually,” Ryan told the paper.

Tchen did not immediately respond to Fox News’ requests for comment.

The subpoena would have required Tchen to appear at a May 31 hearing on O’Brien’s request for a special prosecutor and provide “any and all documents, notes, phone records, texts, tape recordings made or received at any time, concerning your conversations with [Cook County State’s Attorney] Kim Foxx in re: Jussie Smollett.”

Tchen reached out to Foxx on behalf of Smollett’s family during the investigation into whether the “Empire” actor faked a hate crime attack on the streets of Chicago earlier this year. Smollett was eventually charged with 16 felony counts of lying to authorities in February, but the charges were, to the astonishment of many, dropped on March 26.

In March, The Sun-Times reported that Tchen texted Foxx on Feb. 1 saying she “wanted to give you a call on behalf of Jussie Smollett and family who I know. They have concerns about the investigation.” The paper also reported that on Feb. 20, Foxx emailed Tchen: “Spoke to [Chicago Police] Superintendent [Eddie] Johnson. I convinced him to reach out to FBI to ask that they take over the investigation. He is reaching out now and will get to me shortly.” Foxx had announced the day before that she was leaving the case, only for her office to clarify the following month that she had “informally separated herself from the decision-making over the case.”

Tchen has denied trying to sway the outcome of the Smollett case.

“Shortly after Mr. Smollett reported he was attacked, as a family friend, I contacted Cook County State’s Attorney Kim Foxx, who I also know from prior work together,” she said in a March statement. “My sole activity was to put the chief prosecutor in the case in touch with an alleged victim’s family who had concerns about how the investigation was being characterized in public.”